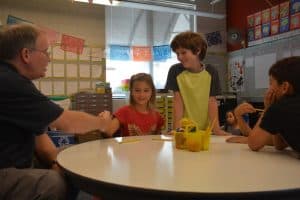 Students at La Ballona Elementary School are taking part in an innovative, new learning experience designed to help them learn about mathematics in a way that is both fun and engaging. Each Tuesday after school, students gather for La Ballona Math Circle, part of a movement originated in Eastern Europe that came to the United States in the 1990s. Since then, the movement has spread nationwide, with more than 180 Math Circles operating across the country, in a wide variety of formats and settings.

At La Ballona, the Math Circle brings students together with mathematicians, mathematical scientists and mathematics educators, as well as parent volunteers, in an informal setting to work on interesting problems or topics in mathematics. A primary goal of the La Ballona Math Circle is to make the experience accessible to every interested student. For that reason, the Circle meets on campus after school (rather than on a weekend) to accommodate students who may not be able to attend sessions at other times, does not charge fees, and enrollment is strictly on a first-come, first-serve basis.

“The La Ballona Math Circle is very different from the only other local math circle, the Los Angeles Math Circle at UCLA,” 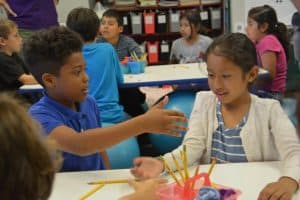 Mellor said over 62% of La Ballona’s students receive free or reduced lunch, and over half are English Language learners.

“Traditionally, this is a population that struggles academically, but La Ballona works hard to help them succeed,” he said. “Test scores in mathematics are on a par with the state average, but below average for the Culver City district. We would like to help the students at La Ballona equal, or even exceed, the level of mathematics achievement in the rest of the district.”

With the adoption of Common Core in California, this means meeting not only content standards, but the new standards for mathematical practice. Math Circles address, he said, these new practice standards, such as problem solving, perseverance, and abstract reasoning.

Mellor founded the program together with Christie Uhe and Sandra Haro, teachers at La Ballona. Ms. Uhe is responsible for training teachers throughout the district in Cognitively Guided Instruction (CGI) in mathematics, an approach which meshes well with the goals of the Math Circle.

The Circle began in the spring of 2016, with an 8-week trial program for first-graders. In 2016-2017, it is expanding to three 6-week sessions during the year, one each for second-graders, first-graders and Kindergartners. The program has certainly been successful at increasing enthusiasm for mathematics among the students – from spring 2016 to fall 2017, the number of interested students increased by almost 40%. In the future, Mellor said, the intent is to expand the program to the third, fourth and fifth grades, however that will require new funding.

La Ballona and CCUSD are generously supporting two teachers to help run the Math Circle; doubling the size of the program will double that cost, probably more than the school can afford on its own, he said. In addition, the Math Circle needs basic supplies (such as markers, decks of cards, etc.) so it does not abuse the materials belonging to the classrooms it “borrows.”

“The La Ballona Math Circle is dedicated to promoting a view of mathematics as a fun and creative activity, and through that view helping traditionally underserved students to develop the mathematical practices and habits of mind that will allow them to succeed in future studies and careers in mathematics and the sciences,” Mellor said.