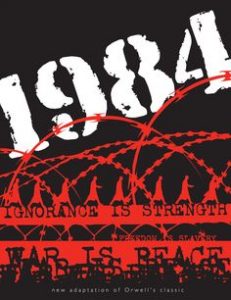 The dystopian world Orwell created has been declared reality in movies, plays and productions repeatedly in the 67 years since it was printed.  The current production of “1984” by the Actors’ Gang, an adaption by Michael Gene Sullivan, is the latest version of totalitarian reality.

Watching Pierre Adeli (Winston Smith) rail alone against the combined techniques of mind control, Big Brother surveillance, political newspeak, doublethink and thought police is chillingly familiar. Smith’s job, after all, is to rewrite history to tow the party line. Constant war to create a constant need for commerce is the norm. The enemy is changeable, the objective is not, and he is surrounded by fine actors determined to cure his insanity in a sterling production directed by Tim Robbins.

In this election year, deliberate lies, misreporting and manipulation of facts all ring familiar. We are no longer shocked, in fact, often the loudest audience reaction at the Ivy Substation was laughter.

The old questions continue, but have the answers changed?

Has Orwell’s vision come true? Can a totalitarian government like China or North Korea control information in the Internet Age? Tame Twitter? Suppress social media? Are we as free as we believe we are, or is it happening and we are unaware?