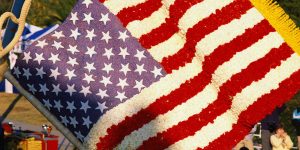 As challenging as it is to write about an event that hasn’t happened yet, I’d like everyone to take a moment from their arduous and detailed prep work, and reflect on the fact that this is a celebration. This is about fun.

The Centennial is a pretty special kind of anniversary. Consider the boomtown/ghost town cycle that has taken many cities down in decades or less. Think of the vast ocean of Los Angeles that surrounds us, and wonder that we haven’t sunk like a stone.  I think Culver City deserves a parade.

The concept of a parade goes back to the Romans, and only in the last century have we liberated it from a military showcase to a civic festival. Our most popular parades – the Rose Parade, the Thanksgiving Day Parade – have become annual festivals going far past their original intention of real estate promotion and toy sales. Now they are television fare showcasing amazing floats, marching bands, and all kinds of walkers, wavers and cartwheeling clowns.

We only get one Centennial, one chance to parade, and truly might never do this again. From all the complaints I have heard about how labor intensive, traffic clogging and crazy making the whole adventure is in the ramp-up, I just want to come back to the idea of fun.

I had two parades in my childhood – the Fourth of July in Illinois, and Memorial Day in New Jersey. Why these places picked these holidays to have everyone get together and march down the street, I don’t know. In Hillsdale, N.J., we fired off the Revolutionary War cannon in the town center. I was honored to be the flag bearer for my Brownie troop. In Illinois, we parked our floats, both homegrown and commercially chartered, around the town square and ran around with sparklers and squirt guns. They were so much fun, I looked forward to them for months. I remember them with fondness, still.

There are so many civic organizations, schools and scouts walking, I’m just wondering who will be on the sidewalks. But isn’t that just so totally Culver City ?

So while we are packing the paper maché and and splashing paint, washing cars and rolling banners, let’s remember to have fun. There will be plenty of other opportunities to complain about the heat, question our collective sanity and sigh.

The Centennial Parade will begin organizing the march at Overland Blvd. between Culver Blvd. and Braddock  at 7 am on Saturday Sept. 24, and march to downtown Culver City at Culver Blvd. and Lafayette St. The parade will finish two blocks from the Opening Ceremony location in front of the Harry Culver statue and the Culver Hotel at Culver and Main Streets Check-in begins at 7 am, and the parade begins at 9 am.  There will be announcers at both ends of the route, and Culver Blvd. will be closed from Overland to Irving,  from 6 am to 6 pm.

For more info on shuttle buses, the Opening Ceremony, go to culvercity100.org/events/opening-ceremony/