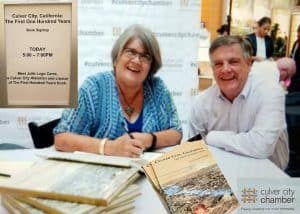 The centennial publication is her second history book of Culver City, in addition to Cerra’s three books on Culver City from the renowned Scenes of America Series. Julie is a true native of Culver City, born, raised and has lived her entire life in Culver City as a fifth generation Californian.

The CC Symphony was there with a string quartet of orchestra members playing for the lovely event at Westfield Culver City.  The Centennial Book is also available at the Culver city Chamber of Commerce, Culver City Historical Society, George Petrelli’s Steakhouse, Sorrento’s Italian Market and Lundeen’s.