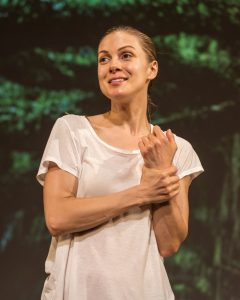 The new Lucy Alibar show at the Kirk Douglas features a set fashioned from old chairs, broken lamps, a few packing crates and some other things that might just be classified as ‘dusty old junk.’ But Alibar’s narrative is proof that really, everything has a use, and small things can be the big things, seen from the right perspective.

“Throw Me on the Burnpile and Light Me Up” is a series of stories, all of them from Alibar’s childhood in the Florida panhandle, being raised by a dad whose law practice is about defending people headed to death row. He calls her ‘Boss’ and she calls him ‘Boss’ with the occasional elevation to ‘Bossman’ but it’s clear that their love for each other is what is in charge of the situation. Even with a mom, a little brother, a vast assortment of animals both domestic and livestock, the kind of grade school teachers that everyone recalls with a flavor of despair, and an expanding list of convicts headed to the electric chair, it’s the Boss and the Bossman who are at the heart of the show.

In a recent interview, Alibar offered that the play was really about defending and explaining Southern parenting. “Most people think the Southern parents are too hard on their kids, but really they aren’t. Life is hard, and they just want you to be ready for life.” If the concept of a burnpile is alien, she’s noted “It’s kind of our southern way of recycling – you make a pile of trash and every now and then, you just burn it all up.”  Skillful storyteller that she is, the burnpile is a significant character in one of her stories, and never less than a presence in most others. Alibar’s tales or the South are both tall and true, and she offers that it is a place in need of “a whole lot of healing.”

Alibar began by saying that she wrote all these stories down just for herself, but they did not feel complete without sharing them.  By the end of the evening, I was convinced that most of that old junk would never be put on the burnpile, but would be found to be useful for something. Her stories might feature wildly unsympathetic people doing things we would never dream of doing, or couldn’t imagine living through, but the deep, real humanity in them shines through like a flame.

Tickets for “Throw Me on the Burnpile and Light Me Up” are available by calling (213) 628-2772 or online at www.CenterTheatreGroup.org. Tickets range from $25 – $70 (ticket prices are subject to change).