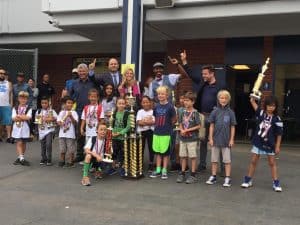 Nine years after winning its first Grand Match Gala chess tournament, Linwood Howe Elementary reclaimed its title this year with a first place finish in the 2016 Grand Match Gala, held on June 25, 2016, at USC. The team will be receiving college scholarships for their efforts and the much heralded title of GMG Chess Tutor Champions.

Nineteen Lin Howe students from K-5th grade garnered a total of 61 checkmates to propel the team to victory. Second grader Reese Ford led the team with a record 11 checkmates and zero losses to come in first in his division. Kinder student Arlo Meighan-Thiel followed behind Reese with 7 checkmates, coming in 2nd place in his division.

As the overall tournament winner with the most checkmates, Reese Ford was given the trophy to take home over the summer before he returned to Lin Howe for 3rd grade this fall. But in a gallant display of character, Reese gave the trophy to a fellow 5th grade student, who was moving on to Culver City Middle School. “I could not be more proud of Reese, who exemplifies Lin Howe’s Character Counts Pillars of Trustworthiness, Respect, Responsibility, Fairness, Caring and Citizenship,” said Linwood Howe Principal Dr. Kim Indelicato.

That trophy made its way back to Lin Howe this week, when Chess Tutors came to morning assembly to announce the win and congratulate the team. Special guests CCUSD Superintendent Dr. Joshua Arnold, CCUSD Board of Education member Dr. Kelly Kent, and Culver City Councilmember Thomas Small looked on. “This trophy is bigger than many of our students who played in the tournament,” remarked Dr. Indelicato. “We are going to have to find a very special place for it.”