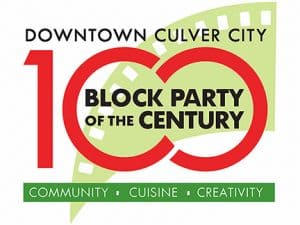 Centennial Committee President Paul Jacobs began the Sept. 21 meeting with an almost solemn statement “It was 99 years ago today the Harry Culver got the charter, and we began to be a city.” With applause all around, it was also announced that it was Mayor Jim Clarke’s birthday. “When you think about the Centennial,” Jacobs continued, “if you had to identify one person who just about personifies the centennial, it would be Jim Clarke. His leadership, his energy, provided the framework for all of us, and we have a special presentation for him from the board.”  Click for video img_2304

Clarke was given a birthday gift of a framed presentation of the invitation to the Gala, and spoke about how pleased and proud he was of Culver City, and the support the community was offering for the year of celebration.

Len Decker of the Centennial Arts and Culture Committee offered that the current grant cycle would culminate in more Centennial-focused art. “We expect to fund 15 to 20 performances this coming year.”

From Transportation, Centennial Tap cards are now available for use on the train and the bus lines for only two dollars. Owing to the street closures planned for the festivities, there will be a shuttle available throughout the event.

Culver City Laureate Janet Hoult spoke to focus attention on the upcoming poetry event at the Senior Center on October 8, 2016. There will be more poetry events at other venues through the centennial.

It has been one complete year that the Centennial Committee has been at work, so it was also the evening to elect officers. In this case, it was a very simple re-elect of all current positions, with Darrell Menthe continuing as Secretary/Treasurer, Terry Robins staying on as VP, and Paul Jacobs continuing as President.

This Saturday, Sept 24, 2016 will be the long awaited kick-off with a parade up Culver Boulevard, a huge downtown block party with 20 acts entertaining (and competing for a $1000 prize) and a “Taste of Culver City” featuring food from Akasha, City Tavern, Essential Chocolate Desserts, Grilliant, Hanjip, Janga by Derrick’s Jamaican Cuisine, Kay n’ Dave’s, K-zo, Lucille’s Smokehouse BBQ, Make Out, Meet in Paris, Rush Street, The Culver Hotel, Tub’s Chili, Wildcraft, and Culver City newcomer Spinfish. The ‘Taste” is a ticketed event, and tickets are available at downtownculvercity.com The downtown party is scheduled to end at 5 pm, and the streets will be reopened.  More volunteers are needed for Saturday.

Laura Chardiet made a presentation on the parade, which will close Overland Ave. from Braddock to Culver as the staging area, starting at 6 am on Saturday. There will be 1200 people marching in the parade, with more than 80 organizations participating.  Chardiet said “We have the little ones from the Office of Child Development dressed as Munchkins, and the Culver City Garden Club will be wearing flowers; everyone is being very creative.”  With five organizations presenting performances, they will stop for 2 minutes each in front of City Hall.

The marching band from CCHS will be the final entry in the parade, and there will be an official ceremony to begin the festivities. Timing is contingent upon when the parade finishes, but should be between 11:30 am and noon.

The kick-off day is just the first of a series of events to celebrate the Centennial, with the Gala at Sony Studio to take place on October 1. Tickets for the gala are still available.

The Culver Hotel will be the hub of much activity, including the VIP luncheon, where the visiting dignitaries of the Sister Cities the Centennial Committee will commemorate the day. The Culver Hotel’s Seth Horowitz promised that security will be present, making sure that all events are coordinated and carried off with ease. The Culver Hotel will also be the site of the closing festivities in 2017.

For maps of street closures, contact info for officials and more on upcoming events, go to culvercity100.org/