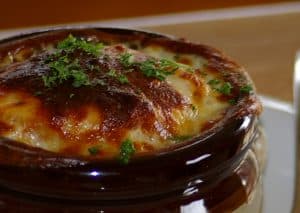 When Pascal Donzel came to the United States from his native France in 1992, he arrived with little in his pocket, the prospect of a job helping to open a bakery in Long Beach and not a word of English.

“He could only say ‘Marlboro Lights,’” joked his wife, Thanh. As it turned out, Pascal’s new boss was Thanh’s uncle. “We met and he never left,” Thanh said. “It’s one of those romantic love stories.” And if the French are famous for love, they are also famous for croissants, pastries and high brow cuisine with prices to match.

Pascal and Thanh, however, decided that when they opened their restaurant, La Dijonaise, in the Helms Bakery Building they would serve fine French food, but without all the attitude and high prices.

Baking in the morning and cooking at night, Pascal relies on family recipes handed down from generation to generation.

The Prix Fixé, a French tradition, will be offered today in two version – Dijon ( $29.95)  featuring their justifiably famous French Onion Soup or Goat cheese salad as a first course, followed by a choice of Coq au Vin, Beef Bourguinon, or Sole Meuneire. The Paris option ($39.95) begins with the choice of Merguez on Croute ( lamb sausage in pastry crust) or Mustard Shrimp, and offers entree choices of Cassoulet, Duck a la Orange, or Mussels in white wine. Both Dijon and Paris include a Kir Royale, and dessert.

Pascal says he is constantly fielding offers to open another restaurant or expand, but he’s comfortable right where he is.  “I have people ask me that once a week, but I’m not interested. Once you open another restaurant, the quality is not the same anymore. We have a long lease, so we’re going to be here for a long time.”

Where to celebrate Bastille Day? In Culver City, biên sur.