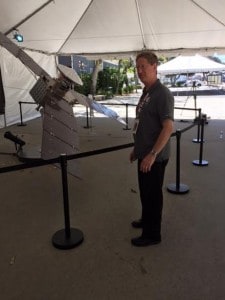 If you think Dr. Steve Levin is busy as the President of the Culver City School Board, check out his day job; he is the Project Scientist on NASA’s mission to Jupiter, the Juno probe.

“What we are looking for is the water. Once we know how that functions on Jupiter, we will know a lot more about how the planet was created, and that will tell us about how the rest of the solar system was created, including us.”

Levin, (photo left with a model of the probe on display at JPL) along with the rest of the team at NASA’s Juno Mission accomplished the extraordinary last night, July 4, 2016 by successfully putting the Juno probe into orbit around the planet Jupiter.

It took more than a decade and a team of hundreds at Jet Propulsion Laboratories in California, the Southwest Research Institute in Texas and Lockheed Martin in Colorado to create the brilliantly designed probe as the first solar powered spacecraft, and her success bodes very well for the future of space exploration.

Levin has been with Juno before she was Juno. “I was working on a few of the other smaller spacecraft that NASA decided weren’t going to be viable, so we took what we had that worked and used it to create the beginning of Juno.”

The relief and delight of completing the orbital insertion was major, as the team

had been confident but cautious during the approach; the chance of either radiation from the planet or debris from the surrounding belt was a small but persistent threat. The immense amount of radiation meant the probe had to be carefully armored for protection, and the shift of position to fire the engine for entry left Juno vulnerable. The call on the success of the “burn” meant that the craft had entered orbit, a new milestone for NASA.

But after just a few moments of basking in success, the scientists were focused on the next phase. The journey to Jupiter was simply the prep work for the real mission. Juno carries a suite of instruments capable of observations from radio and microwave through infrared, visible and ultraviolet frequencies. Particle sensors will catch electron and ion energies from the magnetosphere ( around Jupiter,) magnetometers will quantify Jupiter’s magnetic field, and precise Doppler measurements will reckon the shape and size of Jupiter’s gravitational field.

“We think there is a dense core, maybe 3 to 20 times the size of the earth, and the experiments will work together to mine the data for the answer.” said Levin. “We know there is hydrogen, we know there is helium – how much oxygen will tell us about water. ”

In addition to having three science experiments, Juno also has three passengers; Lego created small aluminum figures of Jupiter, Juno and Galileo; the eponymous gods and the astronomer who first recognized the the moons around Jupiter were orbiting the planet, creating the change in human culture that is still reverberating. Scott Bolton, Juno’s Principal Investigator, cited Galileo at several points during the day, noting that “It was only 1610 when he realized we were not the center, and it changed everything. That’s really not very long ago”

Levin was looking at the coming weeks. “The next big date is August 27th. By then we will turn on all the science instruments and start the experiments. So, we have a bit of time to wait, but not long.”

Those who know Levin’s love of education were not surprised to see him share one of his on-screen interviews with a student working on radio astronomy as part of the project, and he filled the seats of the auditorium with as many science students as could fit. His pleasure in cultivating enthusiasm for science and space was clearly contagious.

Juno will be the second spacecraft to orbit Jupiter, following the Galileo probe which orbited from 1995–2003.

Her name comes from Greco-Roman mythology. The god Jupiter drew a veil of clouds around himself to hide his mischief, but his wife, the goddess Juno, was able to peer through the clouds and see Jupiter’s true nature. It was a suggestion from Theo Clark, one of the original staff who is still on board as the project’s historian.

In 53 days, we will have more information on Jupiter’s true nature, and how water played it’s part in the creation of our solar system.