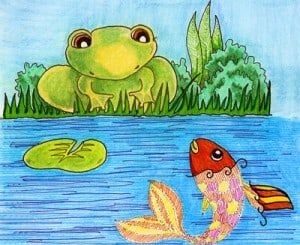 Culver City Public Theatre announces its 18th season of free theatre in Carlson Park. The season opens on July 16th at noon with Frog Tails, an original play as part of the Children’s Popcorn Theatre series. Long time company member Eric Billitzer has once again combined and updated two Grimm folk tales for a comedy of mistaken identities, magical spells, royal romance, and talking animals. Directing is Nicola Henry, Vice President of CCPT. Nicola trained in London’s Covent Garden securing a BA Honours Degree in Drama and set up her own theatre company and acting school in the UK for children and adults, Imagine Theatre Company.

Carlson Park will be transformed into the Forest of Arden for this season’s main stage show, Shakespeare’s lighthearted pastoral comedy, As You Like It..In explaining the title of the play, Shakespeare scholar G.B. Harrison wrote, “It pleases some by its idyllic romance, others by its optimistic philosophy of simple goodness, and yet others by its cynical irony. Indeed, you can take this play just as you like it.” Directing is Benjamin Rathbun, who has enjoyed directing both classical and contemporary comedies and dramas. He is a classically trained actor, with extensive experience performing the works of William Shakespeare.

Performances will be Saturdays & Sundays, July 16th through August 21st. Frog Tails begins at noon, As You Like It at 2 pm. Admission is free and audiences are encouraged to bring blankets or lawn chairs. Carlson Park is located at the intersection of Braddock Drive and Motor Avenue in Culver City, 90232. Go to www.ccpt.org, call 310-712-5482, or email [email protected],org for more information.