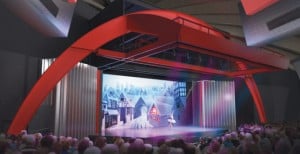 Love for midcentury modern architecture is at a fever pitch. An era long known for its iconoclastic forms and ruthless experimentation might some day soon also become synonymous with something quite unexpected: thoughtful and gentle renovations.

Such is the case with Hodgetts + Fung Architecture’s impending renovation of Culver City’s Robert Frost Auditorium, a 1964 piece of flair by architects by Flewelling and Moody that is inscribed into the Angeleno landscape. Flewelling and Moody’s ginkgo leaf-shaped auditorium is made of poured-in-place concrete that is only four inches thick and undulates to create a sweeping roof anchored to the ground by a massive foot. Craig Hodgetts said  “It’s a real representation of that era’s architecture and could not be replicated today.”

This modern marvel of engineering has withstood several major earthquakes, including the 6.7 Northridge Earthquake in 1994, with no damage whatsoever. The 1,200-seat auditorium’s interior, however, was poorly designed from the onset, with inefficient and inadequate HVAC systems as well as generally inflexible seating and ceiling heights. Home to Culver City High School’s theatre troupe, the building is finally being remodeled to include a completely new HVAC system, a new black box stage, and a permanent-but-flexible catwalk.

Because of the building’s impressive structural maneuvers, architects for the project had to make special overtures in their designs, erecting an Alexander Calder-inspired arch within the space to anchor the stage and catwalk without touching the existing structure or disturbing the post-tension rods located within the existing slab. “We used x-rays to determine exactly where on the floor plate the tension elements occur. The massive steel structure comes down daintily with a petito quality between those elements. “The interior was made into something that measured up to the exterior,” Hodgetts remarking on the technically complicated scheme.

Work on the building is expected to begin this summer.