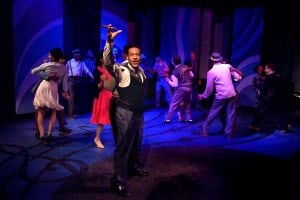 A rare blend of R&B, rock and relevance, Recorded in Hollywood tells the story of trailblazing Los Angeles entrepreneur and civil rights activist John Dolphin, who made his mark on the national music scene long before Motown existed. Written by Matt Donnelly and Jamelle Dolphin, the production features an ensemble of 21 performers, a six-piece live band, 15 original songs by Andy Cooper, and eight covers of songs launched in the legendary Dolphin’s of Hollywood record store on Central Avenue in South L.A.

In its first incarnation as a 99-seat production, Recorded in Hollywood received stellar reviews including a Los Angeles Times “Critic’s Choice” and a Stage Raw “Pick of the Week”; was a Stage Raw Award nominee for Musical of the Year; and was featured on NPR’s “All Things Considered,” in the Sunday Los Angeles Times and in the LA Weekly, among many others.

John Dolphin opened his Dolphin’s of Hollywood record shop in 1948, where he helped build the careers of some of the biggest names in music.

“When he realized that no one was going to let him open his store on all-white Hollywood Blvd., he brought Hollywood to Central Avenue,” Jamelle explains. “By naming the store ‘Dolphin’s of Hollywood,’ he was telling the world that he was going to stare discrimination in the face and not blink.”

Dolphin’s of Hollywood soon became the most famous record store in the country, with legendary DJs like Dick “Huggy Boy” Hugg, Hunter Hancock and Charles Trammel spinning records all night from the front window. Dolphin recorded a host of R&B, blues, jazz, rock ‘n’ roll and even western music talent at the store on a series of labels with evocative names like “Lucky,” “Money,” “Cash” and “Recorded in Hollywood.” The many great artists whose careers he advanced included Sam Cooke, Jesse Belvin, Charles Mingus, Pee Wee Crayton and Major Lance to name a few. A marketing genius, Dolphin was the first to keep his store open 24 hours, and he pioneered the “Buy One, Get One Free” marketing concept. The shop and its broadcasts were a gathering place for music lovers from every race and background and became “the place to be” in L.A. — despite ongoing opposition and harassment from the LAPD under police Chief William H. Parker.

Recorded in Hollywood opens for press on Saturday, July 16 and continues through Aug. 7, with performances on Thursdays and Fridays at 8 p.m.; on Saturdays at 2 p.m. and 8 p.m.; and on Sundays at 2 p.m. and 7 p.m. Preview performances will take place on the same schedule, beginning July 8. Tickets range from $39 – $59. The Kirk Douglas Theatre is located at 820 Washington Blvd, Culver City, CA 90232. FREE parking is located across the street, underneath Culver City City Hall: enter on Duquesne, just south of Culver Blvd. For reservations and information, call (213) 972-4488 or go to www.RecordedInHollywood.com.