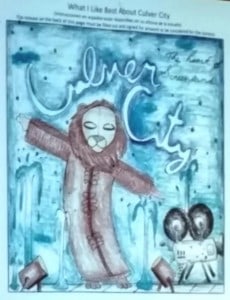 Culver City Citizens will begin celebrating a “Century of Change” on September 24, 2016 as the opening ceremonies kick off a year of activities.
The Culver City Centennial Celebrations Committee has been planning the anniversary party for more than a year and will shepherd the city through 24 approved, 7 pending and more expected events that have been planned, proposed and presented by local citizens, clubs, groups, businesses and others. Committee member Phil Tangalakis said all will be listed on the committee’s Centennial calendar on the official website www.CulverCity100.org
Secretary-treasurer Darrel Menthe presided over a skeleton crew Tuesday June 21 as many committee heads were missing. The election of a vice president to replace Goran Ericksson, who resigned to take a seat on the City Council, had to be held over until July. The 2-year budget was also postponed until the July meeting, but that “fundraising has been so successful, we are on track for our planned events.” Donations of $170,000 will increase with a new $10,000 platinum sponsor, Symantec. The Brick Sales, planned for the second year called for between three and four hundred $125 bricks will be inscribed with nams and installed either in Parcel B, or because that project has been postponed, replace the grass in front of City Hall.
Opening ceremonies will include speeches, a parade and block party, 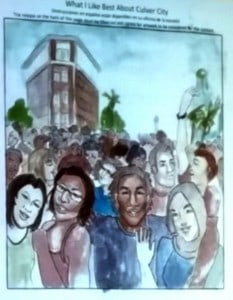 featuring Culver City’s famed restaurants, local talent shows and creative children’s activities. Banners featuring local students’ art, will go up in September, according to the head of the marketing committee, Judy Scott. The 15 to 18 platinum sponsors will get two each. A street banner on Main is proposed to stay up all year and be half the width, to allow other groups to promote their events in the empty half. Flags and logos on squad cars are planned, but not on unmarked cars, she said.
Invitations for the October Centennial Gala at Sony Studios will be sent in July, with 2,000 of them going out in the hopes that 500 tickets will be sold. Sponsors will receive 150 tickets to the event.
A presentation on recording the Centennial on video by a company in May revealed the high costs of such a project. “The minimum would be $50,000 and up,” he said. A suggestion was made to have citizens video events with their cell phones and post them on a dedicated YouTube channel.
Lloyd Clayton of the Mayme Clayton Library and Museum reminded the committee the 10-year-old museum has 2 million artifacts, the largest collection of African American memorabilia in the country. “I wish there were some way to include the museum in the Centennial,” Menthe said. Clayton offered a possible event focusing on a silent movie from the 30s that reveals much of old Los Angeles and Culver City. The committee felt showing the movie would be a real contribution to the Centennial.
Menthe welcomed suggestions for a permanent legacy the committee could leave the city after the celebrations are over. In March, CCCCC advisor Julie Lugo Cerra suggested the committee, “Do something lasting for the city, not just a plaque with names.” She suggested a project on the level of lights at Blanco Park or planting trees.
The next meeting will be held at City Hall on July 14.

Graphics are from the student art submissions-individual artists were not identified.