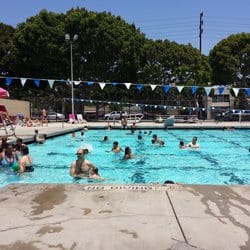 • Culver City Municipal Plunge – On June 13th, the Aquatics staff began teaching group swim lessons for swimmers of all ages. Our experienced instructors provide lessons for beginning up to advanced swimmers. Students are tested on the first day and assigned to the appropriate class for the remainder of the session. A maximum of 50 students are accepted per class, per session. When a class reaches maximum registration, a waiting list is created and interested swimmers are notified when space becomes available. Classes meet Monday – Friday for two-week sessions and the cost is $50 for residents and $60 for non-residents. Swim lessons run through August 5th. For more information on availability and to register online, please visit activenet020.active.com/culvercity.

Community Development
• Culver Crossroads Shopping Center (at Washington and Sepulveda Boulevards) – Staff has been working with the owner of Culver Crossroads to implement physical improvements to the shopping center to address issues related to deliveries and ingress/egress conflicts on the residential Commonwealth Avenue side of the Center. In order to alleviate traffic congestion and illegal turning movements for vehicles exiting the center onto Commonwealth Avenue, the Commonwealth driveway has been converted into a one-way ingress only driveway with a gate arm to ingress and to prevent egress from the driveway. The reconfigured driveway has also resulted in the addition of two parking spaces to the Center’s parking lot. In addition, the City has created a 24-hour 7 days a week loading zone on Sepulveda Boulevard in front of the shopping center in order to eliminate deliveries and loading on Commonwealth Avenue. (editor’s note – Culver Crossroads Shopping Center is not connected in any way to CulverCityCrossroads.com. Our        publication predates the shopping center by more then two years.)
The Planning and Enforcement Services Divisions will continue to monitor the on-site parking and vehicular circulation as well as loading and delivery activities to ensure that they are not creating a nuisance.

• Hayden Tract Spur – Construction of the Hayden Tract Spur Parking Lot Project commenced on April 11th. Work on the project is anticipated to be completed by July 15th. The progress on the project is continuing
Fire Department
• CPR Event – The Culver City Fire Department hosted a successful Sidewalk CPR event on June 2nd. Firefighters were successful in training several passers-by. The American Heart Association’s Hands-Only CPR is cardiopulmonary resuscitation without mouth-to-mouth breaths and is recommended for use by citizens who see a teen or adult suddenly collapse. Immediately providing Hands-Only CPR to a cardiac arrest victim can double or even triple their chance of survival. To learn more about Hands-Only CPR, go to www.handsonlycpr.org. For more information on conventional CPR, or to find a CPR class near you, visit the American Heart Association at www.heart.org or the American Red Cross at www.redcross.org.

• Strike Team – On June 4th, Culver City Fire Department’s Engines 1 and 2 were deployed with a strike team to assist at the “Old Fire” in Calabasas. The strike team was comprised of firefighters from Culver City, Santa Monica, and Beverly Hills Fire Departments. The team assisted with structure protection and returned to the City early the next day.

• Emergency Preparedness Training – The Department would like to thank staff from the City’s PRCS Department and Housing Division for attending a Family Assistance Center (FAC) Training this past week to better prepare them to serve our community. In the aftermath of a mass fatality incident (MFI) or mass casualty incident (MCI), families may seek assistance. The establishment of a FAC will provide victims’ families with the support and information they need.

• FBI National Academy – On June 10th Lieutenant Jason Sims graduated from the FBI National Academy located in Quantico, Virginia. Lieutenant Sims participated in the 10-week academy where he attended classes and participated in physical fitness training. Jason’s class had 221 police managers from 40 states and 21 foreign countries. The FBI National Academy is recognized as one of the premier training for police executives in the area of leadership and academics.
• Culver City Police Department Supports Explorer Participant – On June 10th, Sergeant Dan Sukal and Detective Toby Raya stopped by the Hamilton High School Graduation Ceremony to congratulate Explorer and graduate Dashawn Matthews, before he heads to California State University, Dominguez Hills in the fall. Dashawn has been an Explorer since January of this year and plans on pursuing a career in law enforcement when he graduates from college.

Public Works Department
• Alley Maintenance & Clean-up – The Public Works Department will begin its annual alley maintenance and clean-up on July 11th, and it is expected to take approximately three months to complete the clean-up of all alleys in the City. The maintenance generally begins in the alleys in the western portion of the City and progresses through the eastern and southern portions during the three month period. The maintenance will include grading unpaved alleys, performing weed abatement, picking up abandoned items, and filling potholes. The work will not include paving alleys.

Property owners with properties that are adjacent to public alleys received notices earlier this month through the City’s Code Enforcement Division requiring them to clear back vegetation that overhangs into the alleys, in an effort to help expedite the maintenance and cleaning.
• Southern California Edison (SCE) Rotating Outages – SCE has announced that its customers may experience rotating outages this summer due to the recent restricted operations of Southern California Gas Company’s Aliso Canyon natural gas storage facility. SCE encourages the community to conserve energy use this summer and to sign up to receive Flex Alerts, which are voluntary calls for their customers to conserve electricity by going to www.flexalert.org/. For tips on how to save electricity, please visit: insideedison.com/stories/sce-encourages-energy-conservation-this-summer.
• Water Efficient Fixtures – As part of the City’s Water Conservation Plan, the water fixture retrofitting and replacement project was completed at 24 facilities. The project has reduced the City’s potable water use and included replacing 25 water-using urinals with waterless urinals, retrofitting 123 toilets with 1.6/1.1 gallons per flush dual-flush diaphragms (which provides individuals the ability to flush solid waste using 1.6 gallons and liquid waste using only 1.1 gallons of water), replacing or retrofitting 83 toilets, installing 52 low-flow shower heads and installing over 100 low-flow aerators on faucets.
Transportation Department
• Operator of the Year – At the June 13th City Council meeting, Bus Operator Jonathan Culbert was honored as the recipient of the 2015 Earl Barr Culver CityBus “Operator of the Year” Award. Mr. Culbert achieved this award by being in full compliance with all City and Departmental rules and regulations and maintaining an excellent safety and attendance record. Mr. Culbert was previously named the Operator of the Quarter for the First and Second Quarter for 2011, the Second and Fourth Quarters for 2013 and the Third Quarter for 2015. He has served with the City of Culver City as a Bus Operator for approximately six (6) years.

• Distinguished Operator of the Year – At the June 13th City Council meeting, Bus Operator Steve Sanceri was honored as the recipient of the 2015 Culver CityBus “Distinguished Operator of the Year” Award. The award acknowledges his unmatched performance, outstanding safety, attendance, punctuality and customer service record. The award also acknowledges his past Bus Operator of the Year Awards. He has previously been named the Operator of the Quarter in 2011, 2014 and 2015; and he was honored as a recipient of the Earl Barr Culver CityBus “Operator of the Year” Award for 2004, 2005, 2006, and 2008. A truly distinguished employee, Mr. Sanceri has been the recipient of the Culver CityBus “Distinguished Operator of the Year” Award since its inception in 2009. Mr. Sanceri has served as an Operator for 15 years and shares that this is the best job he’s ever had!
• Dump the Pump – Culver CityBus celebrated the nationwide Dump the Pump Day by offering FREE rides to all passengers on June 16th. Dump the Pump Day was started by the American Public Transportation Association in June 2006, when gas prices reached their highest levels at that time ($3 per gallon). Dump the Pump places emphasis on public transportation nationwide as a travel option that saves money, is great for the environment, and improves overall traffic circulation for all!
• State Approves Transportation Application – The Transportation Department has been awarded $56,805 in Low Carbon Transit Operations Program (LCTOP) funds through the State’s Cap & Trade program. The LCTOP is one of several funding sources that are part of the Transit, Affordable Housing and Sustainable Communities Program established by Senate Bill 862 in 2014. The LCTOP draws proceeds from the Greenhouse Gas (GHG) Reduction Fund to support transit agencies in their efforts to increase transit ridership and meet the statewide GHG reduction goals identified in multiple California legislative actions, including AB32. Culver CityBus will utilize these funds toward the operation of its Line 6 Rapid bus service which traverses the 12.5-mile route along Sepulveda Boulevard, from UCLA at the north to the Metro Green Line Station located southeast of LAX. Project requirements include transit service which benefits the disadvantaged communities identified along this corridor. The service provided by Culver CityBus Line 6 Rapid reduces GHG by approximately 736 metric tons of CO2 annually.
• I-10/Robertson/National Area Multimodal Circulation Improvement Project – The Project includes planning, preliminary engineering and design, and environmental analyses of a package of improvements to the I-10 Freeway/Robertson Boulevard on/off-ramps and arterials streets in the area. It is anticipated that the Project will result in a number of near-, mid-, and long-term transportation improvement projects that will improve the access to and the operation of the I-10 Freeway. This project will improve traffic safety and circulation conditions for all modes of transportation in the area and to the Exposition Light Rail Culver City Station.
City of Los Angeles awarded the contract for the project study to Michael Baker International in November 2015. The Project began in January 2016, with participation from LA, Culver City and Caltrans staff. The project is currently in the feasibility study stage and is anticipated to go through project initiation documents and the environmental impact review process in the next four years.
• Bus Stop Relocations Community Meetings – The City Council has approved the implementation of a Bus Signal Priority System (BSP) that will improve the efficiency of bus service by providing traffic signal priority to buses at signalized intersections along their routes in Culver City by extending the green time a few seconds, a Culver City bus running late may catch up to the schedule. As part of the BSP Project, 35 existing nearside bus stops are recommended to be relocated to the far side of the intersection. This relocation is necessary to maximize the effectiveness of the BSP System. The relocation away from nearside will provide the opportunity to regain some parking spaces, in most instances, in the nearside, and will also cause the loss of some parking spaces in the new far side.
Three Community meetings will be held on Saturday, June 25th, 2016. They will be “Open House” style – you may come in at any time during the scheduled time. The purpose of the community meetings is to provide information on the bus stop relocations, answer questions about specific locations, and receive input from the public. The input received will be communicated to the City Council at its regularly scheduled meeting of August 8th at 7 pm, in the Mike Balkman Council Chambers.
City Hall – Dan Patacchia Conference Room at 9770 Culver Blvd, Culver City, CA 90232. Saturday, June 25, 2016, at 10 – 11 am; 1 – 2 pm; and 4 – 5 pm. Depending on attendance, staff will remain available beyond the scheduled time to be sure all questions are addressed.
If you have questions or comments regarding this topic, please contact staff, as follows: By phone at (310) 253-5634. Please leave a message and your call will be returned or by e-mail at [email protected]