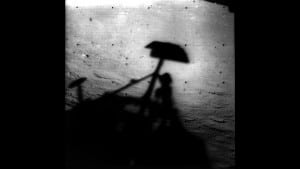 Before humans could take their first steps on the Moon, that mysterious and forbidding surface had to be reconnoitered by robots. In 1961, When President John Kennedy set a goal of landing astronauts on the lunar surface, little was known of that world, beyond what could be gleaned from observations by telescopes.

Was the surface solid enough to support the 33,500-pound Apollo lunar lander? Or was it so deeply covered in dust from billions of years of meteorite impacts, as some theorized, that the lunar module would simply sink out of sight, dooming the astronauts?

A series of U.S. mapping spacecraft called Lunar Orbiters photographed the Moon from orbit in 1966 and 1967. But it would be the Surveyors that would scout that rugged surface for Apollo, and 50 years ago this month, the first of that series of landers touched down successfully. Surveyor 1 landed on the Moon on June 2, 1966.

As JPL’s Justin Rennilson, co-principal investigator on the Surveyor television experiment, recalls, “Planning for Apollo required getting really high-resolution images showing the details of the lunar surface.. Even something two feet in size could topple a spacecraft.”

“We figured the probability of success at around 10 to 15 percent,” Rennilson said.

Surveyor had been sent on a direct trajectory—it would not enter lunar orbit before landing, but would hurtle directly towards the surface at 6,000 mph. The thrusters had to fire at precisely the right moment and maintain perfect orientation to communicate with Earth, all the way down.

“I remember sitting there watching the oscilloscope as the spacecraft was coming down,” said Rennilson, “all the way to the lunar surface. ‘God, the signal is still there and it is still working!’ I thought. We were successful and it was just astounding.”

The first views of the lunar surface were striking, but not easily acquired. Photography from space was still in its infancy. The camera was advanced for its time, a slow-scan television imager with a zoom lens—the first time such an arrangement had been used in space.

The first sets of panoramic images were created using a then-new technique of taking instant-photography images from a small TV screen and then assembling the photographs into a larger image. Rennilson remembers the process vividly: “We had a Polaroid camera attached to a 5-inch-diameter CRT so that you could capture images on Polaroid film.

By the end of Surveyor 1’s mission six months after it landed on the Moon, 11,240 images had been returned, allowing for the creation of dozens of wide panoramas and allowing the examination of details as small as 0.04 inch (1 millimeter) in diameter. Images of the three footpads demonstrated that not only was landing on the Moon possible, but that the lander had not sunk into deep Moon dust—as was feared by some scientists—but had landed on a firm, supportive surface.

By the time Surveyor 7 completed operations on the Moon in February 1968—just 10 months before Apollo 8 orbited the Moon—the pathway to the first crewed lunar landing of Apollo 11 on July 20, 1969, was open. The Surveyor program had been critical to that accomplishment.