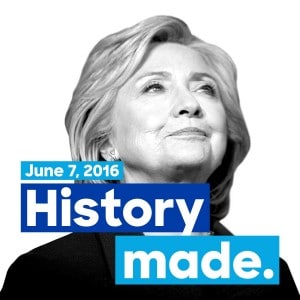 Last night as the numbers were being tallied, I had a memory of sitting with my parents on a hot summer evening in 1972 watching the Democratic Convention. There were a lot of candidates on stage; my folks patiently explained the nominating process, spoke of the need to end the war, and offered their reasons for being Democrats.

My father pointed out Shirley Chisholm. “She’s not going to win this, but she is the most important person on that stage. When they elect a women to the White House, they are going to remember her being on that stage today.” I remember listening to her speak, and recognizing that she had a speech impediment. As a kid who was often bullied for having the wrong accent, that impressed me even more than being female or black; that she would choose a career of speaking in public seemed one of the bravest things I’d ever heard.

Brave, as you may know, is the quality I think most needed for women to be successful   (and happy.) I’m very proud of Hillary. She has worked long and hard to get the skill set, the connections and the support to get the nomination, and I feel that she will be a great president.

It’s a huge shift in the balance of the universe,  just when we most need it. With the loss of Title IX hidden within the push for transgender acceptance, female erasure is gaining legal status. With the loss of health care rights in most of the country – 231 legal restrictions on choice have been enacted in just the last four years – young women are dying. Pay equity isn’t even close to reality, not even in government jobs.  And the number of women in Congress? Still depressingly low.

But Hillary Clinton is the Democratic nominee. Now we need to give her a Congress she can work with, and allow progress to proceed.

I am deeply grateful to Bernie Sanders and all the millions of voters getting excited about bringing this country up to where it should be. It’s high time we pulled the center back from the far right, where it has been both stage managed and stuck for too long. But I also like to point out that if that was Bernadette Sanders, she’d have been the mayor of Burlington, and that’s it. Women who identify as Socialists are not elected to national office.

Just as Barack Obama has had to endure some heinous bigotry and racism, Hillary Clinton knows that she is walking into a hurricane of  sexism, and she is walking forward fearlessly. I love brave. It is the quality that makes all other qualities – intellect, strength, poise, and charisma – possible.