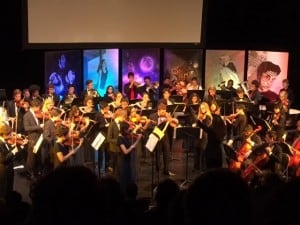 “It was like home for me.”
“It gave me a sense of being home.”
“When I was at the academy, I was home.”
The same sentiment echoed through the evening at The Kirk Douglas Theater on Saturday June 4, 2016. Java Gala VIII, the 20th Anniversary of the Academy of Visual and Performing Arts at Culver City High School, called together current students, founding faculty and plenty of alumni for an evening of music, dance, film, theater, fundraising and merry making.

The program flowed from one part of the Academy to another, weaving music with dance, splicing film with theater and and art, and this year, adding in a number of heartfelt alumni tributes. After an opening number from the Jazz Ensemble, the Danger Zone dancers took the stage for ‘Stranger’ and then up to the screen for the short film “Sensory’ by Keely Martin. The Co-presidents of Young Film Makers, Ciara Page and Zehra Patail offered their thoughts on the year and the process – all of it good.

While the dance and the music continued, the traditional large panels were up on display on stage, an annual gift from the art department to the fundraiser.

The dance academy was represented by graduating senior Megan King and alum Louis Chavez, who confirmed that his time at the AVPA made a huge difference in his life and career. “I don’t even know how to dance – and I din’t know anyone. By then end of my first year, all that had changed, and I was right there, surrounded by love and support.”

A special Hall of Fame presentation gave awards to the founding staff and fundraisers who created the AVPA 20 years ago, starting with original board member Dan Nannini and topping off with retiring President of the AVPA Foundation, Elaine Behnken. Big cheers also went out to Janice Pober and Brian Higgins, the Fineschriber Family Foundation, and all the parents who contribute not just their funds, but their time and talents to school.

The second part of the evening saw Dr. Tania Fleischer on stage, wielding her conductor’s baton to delightful effect with the Orchestra playing “Airplane Suite” from the film, ‘Airplane’.  Not entirely by coincidence, the Zucker brothers, who wrote and produced the film, were in attendance, having also donated some signed movie posters as prizes for the top donors of the evening.

The theater academy was represented by graduating seniors Claire Skelley and Sam Petersen, both of whom spoke of the “home” they enjoyed while they attended AVPA, and the Blurred Vision Theater Company offered their 10 minute festival cut of “Sweeny Todd.”

The Starving Young Artists were represented by Alex Cerutti and Araina Pacino, praising Kristine Hatanaka for her mentoring and pointing to the art on exhibit in the lobby. Both of them noted the murals that had gone up on campus during their years there, with the inspiration of the artists and daily reminders of the importance of color and form as they walked to class every day.

The finale was a wonderful conglomeration of all the AVPA studetns onstage, singing a gentle medley of “Over the Rainbow” from the Wizard of Oz and “Home’ from The Wiz.

With 20 years to look back on and who knows how many more ahead, the AVPA has many, many children who can locate the starting point of their happiness in the arts and success in their careers to being raised in a very good home.