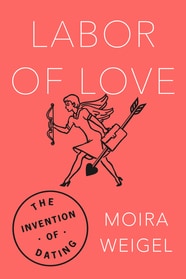 The Ripped Bodice will be hostessing author Moira Weigel discussing her new book “Labor of Love- The Invention of Dating” on this Saturday, June 11 at 5 pm. As featured in the New Yorker,  Weigel shines a light on the American concept of dating, and how it reflects more on economics than romance.

Anyone who has ever tried to find romantic love knows that it’s not easy, what with online dating sites and apps, and often an inordinate amount of texting before a Starbucks meet.

Whatever happened to the days when a man would ask a woman out for a bite or a drink, pick her up and actually pay for it all — you know, a “real” date? Don’t get too nostalgic for those days, says Moira Weigel, a Ph.D. candidate in comparative literature at Yale University who explores the history of dating in her eye-opening first book, “Labor of Love: The Invention of Dating.”

“The invention of dating is like the invention of the crisis of dating. At every point in time what’s unique about dating versus other forms of courtship in other cultures is the boundaries and protocols are constantly being changed and being negotiated,” says Weigel, 31. “When we’re nostalgic about dating, what do we even mean by that?”

Also featured for the event will be artists Kate Durbin and Ann Hirsch, reading from their own diaries on dating and discussing life on the internet when chatrooms were frontier territory.

You could even bring a date.