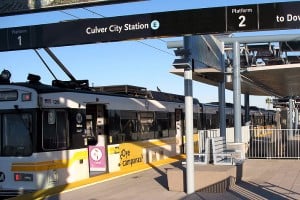 There are still lots of folks in Los Angeles who haven’t ridden our trains. I brought a 35 year resident along with me Last Friday, and marveled at how he felt like he was visiting in a foreign land. Growing up on a kibbutz in Israel, the antithesis of metropolitan life, doesn’t get you used to trains. Living a lifetime in the San Fernando Valley, also the antithesis of city life, didn’t make you train-savvy either. City life, to me, connotes high-rise buildings designed to accommodate many people who want to live near, as they say in Spain, the “movida.” City people are willing to sacrifice space for proximity to services, the arts, late-night dining, and public transportation. As ancient a comparison as Aesop’s “The Town Mouse and the Country Mouse,” there will always be benefits and detriments to both types of living.

To know city-style rail travel is to have lived and/or spent lots of time in the three true metropolises of the world: New York, Tokyo or London. Los Angeles, San Francisco, and virtually any other city you want to name, will never approach the convenience of the train networks of those cities. A viable (meaning, it’s actually okay to live without a car) public transportation network consists of: subways, long and short distance trains, and a network of buses and/or light rail, attached to and connecting up all parts of the city, including the airports. It’s the kind of place where you don’t have to walk more than ten minutes to reach the next point of transport. Berlin comes close these days; Paris, maybe, but I always found it confusing there.

So our rail system is indeed bringing us closer to urbanity, even if it’s development has been ass-backwards in so many ways. I was working downtown in the 80’s when the first Blue Line was unveiled; like a stairway to heaven, the experiment went from nowhere, to nowhere. You could kill a day riding from DTLA’s corporate 7th and Figueroa, to the hotels and office buildings of harbor-side Long Beach. This is why the intersection of 7th & Fig is a hub to this day, instead of our city’s real central station: Union Station, necessitating multiple train changes to get places. Maybe they will fix this soon.

As for the fares, at first, they charged you per transfer, like the annoying buses that were never this city’s forte, but now they seem to have gotten a clue and just have the one fare to anywhere charge of $1.75. The tap, tap, tapping of the plastic, environmentally friendly (as opposed to paper tickets) card is a pretty nice idea, but an abused one, I imagine. They’ll do enforce payment through spot checks; I’ve seen circumventers get fined. It seems inefficient to me, but I guess it must be working for them, and it keeps people employed. I remember when Japan switched to automated ticket-wickets, downsizing the ticket-punching old gentlemen who used to man the gates.

A hallmark of the LA light rail I’ve noticed is that our citizens are in fact so unused to using public transport, that all manners are out the window. On our quick round trip jaunt, we encountered deafening music being played, screechingly loud conversations, and in-your-face begging. In the days before texting, people would pick up a cell phone and start talking as if they were in the bubble of their own home. People can still be found doing that here, on the trains and other public places. In Tokyo, since so much time is spent commuting, they instituted what is referred to as, “ma-na-a mo-o-do” (manner mode), meaning, put your phone on silent. Our rail riders could use a little manner mode for sure. On the Expo line to downtown, there is a PA announcement encouraging people to use the train intercom to report sexual harassment immediately. We wondered why they needed to have such an announcement, but quickly answered our own question: because sexual harassment on the train must exist.

Finally, walking around downtown is still not a pristine experience; there are desolate blocks without other pedestrians, doorways full of homeless sleepers and whole city blocks of closed office buildings without street life. Unlike developer paradises like The Grove, or other vanilla shopping villages you’d find in the outer reaches of The Valley, here, you know you are walking the real, historical, streets from which this city emanated. The architecture is impressive, and it’s a scavenger hunt finding little gourmet bottle shops here, or cigar bars there, and CVS and Walgreens competing for the new residents’ toilet paper purchases. Next stop: Santa Monica.

The train to Santa Monica was a different experience. First of all, several stations are located in residential neighborhoods where free parking for metro customers is not available. At these new stations, there is a proper turnstile for the tap card, which may mitigate fare jumpers. As the train approaches Santa Monica, it travels on street level, therefore having to stop to accommodate local traffic, much like a bus. At the relatively early hour of 9pm, one had to wait twelve minutes for the next train to come. From Culver City, it does not take that long by car to get to Santa Monica in the first place, so one must carefully consider why to take the train instead. The chronic traffic to and around Santa Monica is one reason, and not having to worry about overcharges in the two-hour parking garages is another.

All said, avoiding traffic, saving on gas and mileage, and enjoying the freedom of partying without a car are benefits to rail travel in LA. Even with the weirdos occasionally encountered, the best part is the communal experience of riding with both locals and tourists.