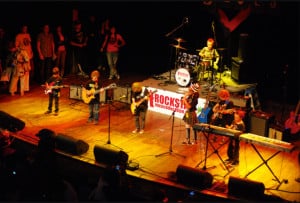 Wild applause for the band members of Discoteques – they are named as one of the top ten bands in the Southern California RockSTAR competition. They will be performing at The Grove this weekend on Sunday June 5, 189 Grove Drive in Los Angeles, 90036.

STAR Education offers this unique program for grade schoolers to jam with a band, learn an instrument, and if you are as good as the Discoteques, perform in front of an audience at a destination venue. RockSTAR winners performed at The House of Blues until that closed, so it’s the Grove for this year’s set.

Turn out to support the show! Bands begin performing at noon, and are scheduled to finish at 2 pm. Who doesn’t love a Sunday afternoon rock show? Culver City can be proud of the continued streak; El Rincon’s Rockets just know how to rock and roll.