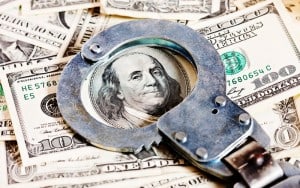 How does civil forfeiture work?  Sadly, it often works like this –

A taco truck owner had $10,000 taken by LA Sheriff’s Department near Lancaster. He answered honestly that he was carrying a large sum of money. Why wouldn’t he?  He wasn’t breaking the law, he was traveling with his own money, from his own legal business. There were no drugs in the car, no evidence of a crime, but a K9 keyed on the money. The driver was not arrested or charged. But his property was seized and put into forfeiture proceedings. And even though he got a California lawyer, and went to a California court, and had a California judge order the return of his money, the LASD declared that it had already been transferred to federal jurisdiction.  At that point he was advised by his attorney to drop the case, because  fighting the US Government is too expensive, and has been known to morph from asset forfeiture, into deportation investigations of relatives, IRS involvement  such is the interlocking and overwhelming power of the federal government.

In 2014, a Los Angeles music promoter had his cash seized twice. He had sent his staff to collect the door receipts at big Mexican music concerts that he promotes and organizes. In both cases, a simple traffic stop turned into a loss of property, even though there was no evidence of a crime. In neither case was the driver even charged with a crime. In Shasta County, $13,000 was taken, and in Woodland, Oregon, $32,000. In both cases, after lengthily delays by both local law enforcement and then federal prosecutors, the funds were returned to the lawful owner, but only because they had the means to hire lawyers to fight their case. In the Shasta case, he knew that the legal fees might exceed the recovery, but he was so angry, he wasn’t about to let it go.

Clearly, this law needs to change, and Senator Holly Mitchell is trying to do just that.

The jaws of legislative death are trying to kill SB 443 (civil asset forfeiture), but we can’t let that happen. These laws were created during the heyday of the war on drugs. They were intended to cripple operations run by drug kingpins. But these laws have been twisted into an ongoing, incentive-driven attack on innocent people who can’t afford to fight the government in court. This burden falls disproportionately on people of color. I am working hard to get SB 443 passed. And then sign the petition at act.couragecampaign.org/sign/CivilAssetForfeiture_CA/?utm_source=Bills+in+trouble&utm_campaign=Thank+you+2014&utm_medium=email