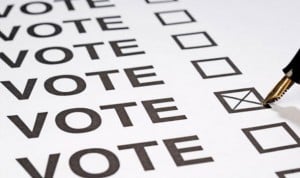 It’s Election Day. Either you have known this for months, or you just realized it, but the fact remains it’s time to go and cast a ballot for our new city council members. Culver City Crossroads has promoted the candidate forums, run letters to the editor, included live links, and done all we can to direct people towards the information, and make this a venue where people can be heard.

If you didn’t hear the candidates speak, or read the letters, or get involved in any of the many meet and greet events, here is the personalized version. Take your phone to the voting booth, and mark these names. Meghan Sahli-Wells, Thomas Small and Scott Wyant.

Vote for Meghan Sahli-Wells. She has done a wonderful job over the last four years, and she will quite probably surpass that in the next four. She has a brilliant enthusiasm for her post that communicates how much energy she gives to her job. Her record on many issues – particularly transportation and affordable housing – makes her a vital presence on the upcoming council. She deserves your vote.

Vote for Scott Wyant. He has put his energy behind many of Culver City’s public service efforts, from the Planning Commission to the Bicycle and Pedestrian Master Plan to the Culver City Education Foundation. He has won praise and support from just about all corners of the community, and his expertise and dedication to his many civic obligations show how much he cares about our city.

Full disclosure – Scott used to write a column for Culver City Crossroads called “Looking Forward” in 2010 under the nom de plume Ted Bellamy. Edward Bellamy was the author of the Victorian utopian fiction “Looking Backward,  2000-1887” and Scott wrote about things like the red light cameras, branding and sales tax. We did include his identity at the end of the column, so it was never an attempt to hide who was writing for us; we just liked the literary twist of it. You can find all these columns by going to the search function – but, later, you are now on your way to the polls. Go and vote for Scott, and you will be glad you did.

We have a lot of candidates, and I can only recommend three. Deciding on a third drops my enthusiasm considerably, for many reasons, but the seat is going to be filled one way or the other. Dipping into the double negative – don’t not vote. Bullet voting is abstaining, and it lets other people make your descision.

I’d like to recommend Thomas Small, as he has great optimism, tremendous education and intelligence, and I think he could do some wonderful work on the council. Setting aside my challenges with those working on his campaign, I recommend Small as someone who has the kind of vision we need in regard to development.  While I am ever more distrustful of the ‘progressives’, I hope that, like Sahli-Wells, Small can go beyond their divisive and limiting style. Overcoming your adversaries is pretty straightforward; it can be much harder to overcome your friends. Small has the talent to be a council member on his own.

I’m sorry not to recommend Gõran Eriksson, as he has a great deal of experience some genuinely good ideas, and he could be a strong addition to the council.  In bigger elections, I generally distrust the candidate who has the most money, but it isn’t as if there’s some corporation or PAC behind all the postcards and door hangers.  No one is buying his influence; it’s his money. But if no one can influence him, does he even need to listen? His pattern of creating problems that he can then take credit for solving is one that disturbs me. It’s manipulative, and less than honest.

Who I don’t recommend you vote for and why –

Daniel Lee has begun every voter forum with the remark that he is older than he looks. I still don’t think he’s old enough. I hope Daniel has some big political success in his future, I’d like to recommend him in another decade.

Marcus Tiggs is too focused on finances to the exclusion of all else. The bottom line is important, but there’ a lot of lines above that that are crucial. His slogan of ‘maintaining the essence’ translates to ‘keep the status quo’ and that’s not an option we have. I like Marcus personally, but holding the fort is not what’s needed.

Both Tiggs and Erikkson have made many comments about the end of our half-cent sales tax. It is scheduled to end in 2023. Even if both of them won double terms in office, they would not be on the council when that comes up. There is caution, and then there is paranoia.

Jay Garacochea could have served on the council at any point during the late 20th century. Which has been over for quite some time now. I do not see the point of a Council campaign with more lawn signs in Los Angeles than in Culver City. I guess if someone asks you to run and offers to pick up the tab, you do that.

This will be a very tight race, and every vote is important. Whoever you vote for, please go to the polls and participate. Democracy can only be effective when we all show up to do it.