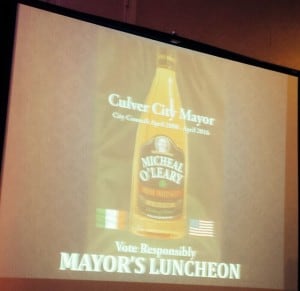 When Mayor Michael “Mehaul” O’Leary began to sing, everyone in the room knew this was going to be different.

AT Mayor O’Leary celebration of his previous turn as Mayor of Culver City from 2011 to 2012 his speech went on for almost an hour, filled with detail, nuance and lots of information. As he prepared on March 31, 2016 to step down from city service, in one final stroke of good policy, O’Leary admitted he had called on the talents of local showrunner Laura Chardiet to create a presentation that was was less time consuming and much more fun. He sang his is re-worded version of ‘God Bless America’ with a strong tenor voice, gave a round of applause to good Culver City and ended with a brief but sincere advertisement for Joxer Daly’s,  (O’Leary’s famous Irish pub.)

With Both O’Leary and Vice Mayor Andy Weissman termed out of office this month after eight years of service to the city council, the humor proved a perfect leavening to lighten the milestone.

The Doubletree Hilton’s second floor was filled with city employees, service clubs, sponsors and elected officials both past and present. As City Manager John Nachbar noted during his lengthy introductions, “Throw a rock in here and you can hit a former Mayor – but please, don’t, don’t throw any rocks.” It could have been a riot.

The annual ritual of toasting the retiring Mayor, giving the ‘State of the City’ speech and applauding the good works and accomplishments of our Police, Fire, Parks and Recreation, and Public Works can feel either prefunctory or heavy, but Chardiet’s sure hand with pre-microphoned heckling from School Board member Kathy Paspalis, and and scheduled interruption by Weissman didn’t allow O’Leary to wander too far afield.

Weissman was far more sedate, giving a short farewell after his eight years on the council, praising his brother and sister council members and reflecting on the era passing. “It’s been an honor and a pleasure, and I’m very proud of all we have accomplished.”

Winding down so quickly that he even finished ahead of schedule, “Vote early and vote often,” O’Leary quipped from the podium. ” I mean, vote in April and in November.”