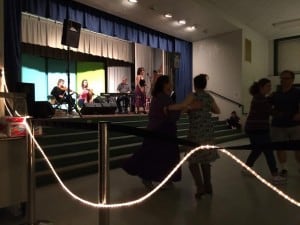 It’s been two years since I created a fledgling dance troupe at Culver City Middle School. I will never forget the process of creating the group, or the high-level critical thinking skills the students displayed through their accomplishments. Those students won’t forget it either. In the then-called “AEIOU” program, which I kicked off two years prior to the dance troupe, student signed up for various enrichment activities, and were then be placed in sessions where they were given a chance to pursue their interests.

In a campus of 1500 students, about a tenth chose “Performances,” but only 80 students could be accommodated in the various roles and responsibilities that the production of a Broadway show in Robert Frost auditorium entails. The remaining 70 thespians who auditioned needed to be assigned to other activities. Some went to pursue their second or third choices, but I still had about 40 kiddos to place. I spoke to the applicants outside of my classroom, and offered them two options: be part of our “sales and marketing” team for the Broadway production, which mostly involved making posters for the campus, or, start a dance troupe. About 15 students gathered for dance.

Students selected pieces from various genres of music. No pronouncements about who would lead the group were made; those who wanted to lead rose to the occasion. I had a stage-like spot in my classroom at the time, which served as a space to create, teach and perform moves. We decided to order matching T-shirts, and perform at lunchtime in front of the entire student body. There is no bond stronger than that created by dance; it is something I believe in, and have experienced over and over.

Dancing, in my life, goes back to my parents meeting at a square dance in New York City in the 1950’s. Later, they shared the hobby of international folk dancing. I came of age during the disco era, and danced what we now call “The Hustle” at school functions and clubs. I tried out Israeli Folk Dancing at UCLA, but was never too good at it in those days. I dabbled in many types of dancing over the years, and I don’t think I was ever considered to be particularly proficient, but, I now realize that I am less a person who just enjoys listening to music; I have always had the passion to move to it.

Now, I dance at least four times a week. I attend three weekday Israeli dance sessions with three different dance leaders, and one or more nights of Contra dancing on the weekends. I attend Rueda de Casino dancing in Media Park on 2nd and 4th Sundays (1:30-3:30) when possible, and sometimes show up at English Country dancing in Lindberg Park (4pm-7pm) – I bike the half hour between the two dances – that’s life in Culver City!

Recently, I attended yet another training session at the Los Angeles Music Center, through the professional relationship I have maintained with that organization throughout my tenure at Culver City Unified School District. Those present engaged in an activity that culminated with a room of 30 strangers working together to create one minute choreographies, to which one piece of music was attached, after the fact. The task was described as an “interdependent movement conversation with a partner.” Again, the twain between dance and language hit home for me. Vocabulary included the words: transition, perspective and form.

In the world of education, dance is considered part of “The Arts” domains that also include Theatre, Visual Art and Music. It is too often considered more of an elective than a college course requirement. In eleven years of mandatory K-10 education (they don’t force you to do PE anymore in 11th or 12th grade) dance is rarely deemed part of the essential standards of a “Physical Education” curriculum. Because of this, most school districts, and certainly those built in the 1950’s expansion of life in Southern California, do not have proper premises for dance practices, performances or events.

I dream of such a space to be created within our school district. This space would have a floating wood floor, adjustable lighting, appropriate acoustic treatment, a built-in sound system that could accommodate both live and recorded music, flexible space for small or large gatherings, an adjacent area for food service, adequate bathrooms and ample parking.

People might say that there is no money in schools for such a thing. On the contrary, our tax dollars are pumped into schools, but other priorities, from grassy sports fields, to technology upgrades, to facilities renovation usually come first. Dance is not a consideration.

Still, I dream of not only dance IN the school day curriculum, but dance AT the available school campuses. At Culver City Adult School, we are determined to play a role in developing an interactive community conversation around dance. We do and will continue to offer dance through our new “DIRECT” program of community interest classes, but we also planning to create a dance program, where people can enjoy several types of dance while socializing. We are fostering community dance events that bring us all together in the delight of interpersonal exchange.

Last Saturday, and future 4th Saturdays, Culver City Adult School is producing Contra Dancing here in town, at Farragut Cafetorium. This was, and will be, a unique social event, providing an opportunity to become part of a group of open-minded individuals who enjoy live music, moving with and connecting to others, and sharing common interests. Our Contra Dance offers as well discounts for Culver City residents, CCUSD students and employees, and to Sony employees as well.

Dance is on my mind, in my heart, and at my feet, and I yearn to bring it to our community. Contact me via this post for more information about contra and other types of dance, or to open a discussion about bringing more dance into everyone’s lives.