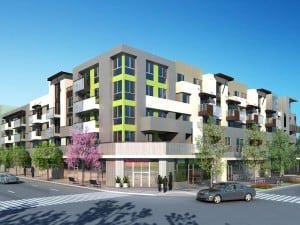 Exterior work is now nearing completion on Access Culver City, a residential-retail complex at the Expo Line’s Culver City Station. With the opening date listed only as “early 2016” new neighbors will be moving in soon.

The project, developed by South Carolina-based Greystar Real Estate Partners, consists of a five-story building which will feature 115 rental apartments above 30,000 square feet of ground-floor commercial space and a parking garage. Other amenities will include an observation deck, a fitness center, a garden lounge and a heated swimming pool.

Plans list future offerings for studio, one- and two-bedroom apartments in a variety of floor plans, as well as two- and three-bedroom townhome units.

Access Culver City is the second of four developments planned around Culver City Station, following the recently completed Platform shopping and entertainment center. Other projects in the works include the mixed-use Ivy Station complex planned by Lowe Enterprises, and an office and residential development proposed by Vitruvian Culver City, LLC.