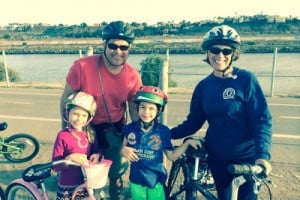 A frequent bike-commuter and member of the Culver City Cultural Affairs Commission, Thomas Small shows an exceptional grasp of the concepts of – and need for – livable streets. In his response to Bike The Vote L.A,  Small strongly declares that Culver City “need(s) more bike lanes and paths that are separated entirely and protected from cars,” and displays a willingness to make tough decisions to ensure quality bike infrastructure, including to “seriously consider dedicating the space from the on-street parking” to create protected bike lanes.

Small supports expeditiously bringing a bike share system to Culver City (which the current City Council already has in process) and to coordinate its implementation with current and future transit-oriented development.

The design and enhancement of our sidewalks, walking paths, bike lanes and bike paths must be advanced to a higher priority. Every destination in our city must be safely and easily accessible by bike and by foot. Culver City should become the most innovative and advanced community in the world in regard to connectivity and transit options for the “last mile” from the Expo Train stations to all the other destinations in our city. Bike sharing, Zip Cars and other car sharing services, electric scooter sharing (http://www.scootnetworks.com/) as in San Francisco, Pedi cabs, shuttles, corporate and other volume discount agreements with Uber and Lyft, Uber pool arrangements, and other innovative strategies will be imperative to the vitality of our city. All of these options need to be integrated into a master plan including the new developments and the school district.

2. With so many people on foot and on bike killed each year while commuting in Los Angeles County, the City of Los Angeles recently adopted a “Vision Zero” policy to work towards eliminating traffic deaths in the City of L.A. by 2025. Would you support adopting Vision Zero for Culver City?

The transportation system needs to evolve and be upgraded with the system described above so that car traffic can slow down a little to make it safer for bikes. We also need more bike lanes and paths that are separated entirely and protected from cars.

3. Culver City is considering implementing protected bike lanes – bike lanes separated from vehicles by a physical barrier – in two key locations: 1) on National Blvd to close the gap between the two halves of the Expo Bike Path that extend to USC/Expo Park to the East and Santa Monica to the West, and 2) on Washington Blvd connecting the Expo Line Culver City station to Downtown Culver City. Do you support these projects, which may require a dedication of developer land and/or a reduction of on-street car parking spaces?

Yes. We need to require this and work with the developers to accomplish it – all of them whose projects are in the immediate area to make both of these projects happen. The bike lanes need to be prioritized. The Lowes Company at Ivy Station, the Platform, Access Culver City, and the new development at Surfas all need to collaborate with the Culver City Public Works, Metro, Los Angeles, and any other agencies and jurisdictions to make this happen. The overly narrow sidewalk on the west side of National south of Washington also needs to be widened and the light poles need to be removed. We should seriously consider dedicating the space from the on-street parking to these projects.

4. Would you support bringing a bike share system to Culver City, and if so, what will you do to expedite its installation?

We need to study the systems promoted by Metro and being used in Santa Monica to determine which system would be best for Culver City, and mandate collaboration with the TOD developer and the other developers of new projects. The City Council should move forward with this immediately.

5. The City Council recently voted to prioritize vehicular travel through Culver City over providing pedestrian access for local residents to businesses and Culver City Park. Do you support the removal of crosswalks at Duquesne & Jefferson and Summertime Lane/Jordan Way & Jefferson?

I think that decision was a mistake. We need to move forward on the alternative transportation options as outlined above so that we are less dependent on private cars to get around the city. And we need to prioritize pedestrian and bike access.

6. Do you presently bike in Culver City? What are your experiences, or if not, what would it take to make you feel comfortable biking on city streets?

I ride my bike regularly as does my wife and my two 8-yr old third graders at Linwood Howe Elementary School. We built our sustainably designed house on Carson St near downtown specifically to be able to walk and bike to downtown, to school, to the Expo Station, to Helms Bakery, to several parks and to many other locations in Culver City. I often take my scooter to the train and then ride it to meetings or concerts in downtown LA after taking the Metro. There are many places in Culver City that do not have good bike access, where the bike lanes and paths are not well designed, and where the design favors the car traffic over bikes and pedestrians. When I ride to City Hall, the bike lanes through downtown Culver City are particularly bad, as they are in West Culver City as well. Let’s fix it.