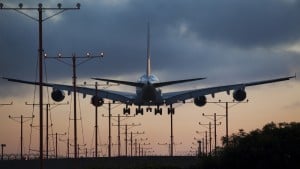 Los Angeles International Airport will temporarily deviate from over-ocean operations for three nights (12 AM – 6:30 AM) from Monday, March 14th through Wednesday, March 16th due to the closure of north outboard runway 24R/6L for runway maintenance and the ongoing deactivation of the Instrument Landing System (ILS) on the north inboard runway 24L/6L for Runway Safety Area construction.
The FAA normally transitions LAX air traffic flow to over-ocean operations from 12 AM to 6:30 AM, wherein aircraft arrive and depart over the ocean to minimize noise disturbance to the communities near the airport. However, with the north outboard runway 24R/6L closed and the ILS on north inboard runway 24L/6R deactivated, aircraft will not able to land from over the ocean to the north runway complex at night. Therefore, the FAA will temporarily deviate from over- ocean operations and maintain air traffic flow in westerly operations (aircraft arriving and departing westbound) during these three nights. As a result, persons living near the airport may notice a change in aircraft flight activity and associated noise.

If you are concerned about jet noise and operations at LAX and how they affect Culver City, there will be a meeting of Culver City for Quiet Skies at the Vets Auditorium on Sunday, March 20 , 2016 from 3 to 4:3o pm.