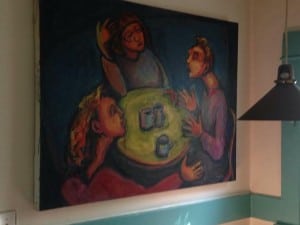 What We Leave Behind —

The writing I’ve been most proud of in this column has often been writing I have done when motivated by the grief of loss. Ruth’s Truths began as a tribute to my turning 55, rhythmically, “the age my mother was when she died,” and I’ve continued since then with my musings about life, descriptions of my travel escapades, and my opinions about education and dancing. In Judaism, when people pass away, we say “May their memory be for a blessing,” which always sounded awkwardly religious to me, but I am feeling lately that the memories of people I have lost are blessing me over and over. I experienced an event this week that happened to tie together three of the biggest (people) losses in my life, and I was struck about the spirit that sometimes still lives in the things we leave behind.

When my mother died in 1987, her possessions included tons of clothing, shoes and mostly costume, but also some fine, jewelry. The shoes went first. My parents had come back from an expatriate assignment in Europe just two years earlier, and the fine Italian leather shoes she’d collected in Milan were virtually unworn. My aunt and her first cousin lingered after the funeral, and I recall sitting with them on the carpet of the bedroom in which she’d died a few days earlier, and having them choose from her collection. I don’t recall going through the clothes much at that time at all; I think they were pretty much put into boxes and put in the garage, to deal with later. As for the jewelry, my sister was to have received her diamond wedding and engagement rings, and her pearls. I was to get “all the rest,” which was mostly costume jewelry.

When it came time for my (second) wedding, my sister was in a rare non-sharing mood, and she wouldn’t let me borrow mom’s pearls! After that incident, I harbored a latent desire for my own pearls that was finally sated in the early 90’s, when a friend purchased a beautiful strand of pearls (corporate outfit pearls) in Hong Kong on behalf of my second husband, who kindly reimbursed her. I loved those pearls for special occasions, the last of which was wearing them to The Los Angeles Music Center’s 50th gala. They survived the first house break in I experienced in Mar Vista in 2002, but ended up stolen from my house here in Culver City when it got broken into last month.

My mom’s possessions didn’t come into play again until 2009, when my father passed away. As we cleared out his “estate,” we came upon several sealed boxes lurking in the inner reaches of his closet. Among the many treasures I found were some boxes filled with my mom’s clothing, and, more shoes. I’d thought the initial selection of items by the relatives, followed by the garage sale when our house was sold, had rid us of any more mom memorabilia! My friend Kari, who just passed on my birthday last December, volunteered that she’d love to look through my mom’s stuff, if I wouldn’t mind. Kari was a thrift shop denizen who loved putting together colorful outfits from bits and pieces acquired, often, second-hand.

Kari knew all of the best places to find vintage and unique trinkets, and her bedroom was known to have been filled with piles of colorful bracelets, hanging beaded necklaces, and multicolored skirts and tops and little jackets that she would tie at her waist. She was fond of platform sandals – had different pairs for all occasions, in colors, materials and patterns, perfectly matching whatever outfit she had put together. I can’t even believe that in all of my eulogizing about her I had not yet included this aspect of her that so many of us enjoyed. The greatest honor I received when Kari passed was choosing her funeral attire, along with another friend. Her clasped hands wore her favored Bakelite rings, to which we matched a dressy black and red outfit, necklace and bracelets. Kari would have been proud of us.

As Kari went through the boxes of my mom’s personal effects, she pulled out a custom-designed, off-white, fur coat. She tried it on, and looked so beautiful in it that I couldn’t help but tell her to keep it. She said she’d be willing to give it back if I ever had second thoughts. When I told my sister, who is not even fractionally as tied to possessions as I tend to be, that I’d given Kari the jacket, my sister began to refer to Kari as, “the friend who Ruth gave mom’s jacket to.”

Then Kari died. Even though I knew her possessions were being given away and/or disposed of, I could not bring myself to ask for anything. I hate the idea of people standing in the wings like vultures trying to “get stuff” when somebody dies. If I could have, the one thing I would have wanted was Kari’s book collection, which included a few tomes I’d given her myself, but I couldn’t bring myself to ask. I found out later that her books had been given to a Good Will somewhere; I can only hope that they’ll make their way to the Good Will Bookstore on Sepulveda, one of the only bookstores Culver City even has.

But I did get to visit Kari’s former home one last time. Her companion was spending his last few days in the place organizing the distribution and/or disposal of her last few items. Most of her personal items were already gone, but several art posters still adorned the walls. I find it interesting that art is often the last decoration added to a new home, and is often the last to be taken down. What is on the walls of a place so governs what makes it personal, it is what makes a place a home. Her friend offered me a couple of the pictures, then happened to mention that he’d gotten rid of all of her clothes already, except one white jacket. He asked me if I wanted to see it, and I said sure, not even thinking…and there is was, now back in my possession, my mom’s white fur jacket.