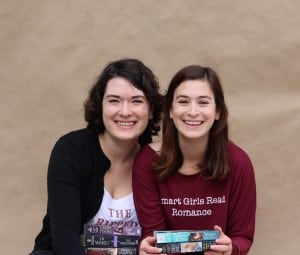 It takes a lot of courage to openly embrace your guilty (or not-so-guilty) pleasures, whether they be Bravo reality shows, fast food hamburgers, or Adam Sandler movies. That’s why it’s infinitely impressive (and exciting!) that The Ripped Bodice—a bookstore selling romance novels and only romance novels—will open its doors tomorrow, March 4, in Culver City.

Run by sisters Bea and Leah Koch, The Ripped Bodice was made possible by a hugely successful Kickstarter campaign, which raised $90,000 in its first month. The shop doesn’t just embrace the romance novel genre; it is explicitly out to break down the stigma associated with the books: a common misconception is that erotica, a sub-genre of romance novels otherwise known as “smut,” is the norm. While some do feature sex to varying degrees, it is not the central component of romance, though it’s often used to devalue the genre. “Romance novels do not generally have a great reputation,” 23-year-old Leah says, “and historically, we have not been great as a country about being open to female sexuality.” Leah and Bea refers to themselves as “purveyors of fine smut,” which needs to be printed on a reusable tote bag immediately.
The sisters have a longstanding affinity for romance lit. As a teen, Leah says, “[Bea] was reading romance and I liked to read what she read.” While in graduate school for Costume Studies at New York University, Bea wrote her thesis on the historical clothing used in Regency romance novels. “That theme ended up becoming my life’s work,” she says. “I became obsessed.” When the L.A.-based siblings began tossing around ideas for businesses they could start together, they originally considered an arts and crafts store that also stocked a selection of books, which morphed into a books-only store, which finally became a romance novels-only bookstore. The name The Ripped Bodice originated from both Bea’s graduate thesis title, “Mending the Ripped Bodice,” and a desire to pay homage to the history and future of the genre.

When it comes to what you’ll find on The Ripped Bodice’s shelves, there will be a selection of erotic novels, but only those that portray healthy, consensual relationships. (Fans of Fifty Shades will have to look elsewhere.) There will also be Young Adult choices (aimed at ages 12-18) and New Adult (18-25) romance novels, which portray (and inspire) important conversations surrounding consent, birth control, and female health. “Those things are so important and so difficult for us to discuss,” Bea says. Above all, they’re focused on promoting the positive messages provided by the genre and disproving the assumption that romance is strictly for women. “We think there’s a romance novel out there for everyone,” Bea says.

If all goes as planned, visitors will be able to buy books, merch, and attend a variety of events. The Ripped Bodice will be a welcome and exciting addition to the ‘hood.

The Ripped Bodice is located at 3806 Main St., Culver City