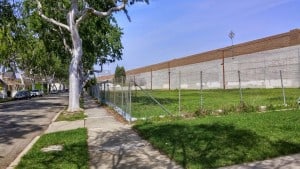 A planning commission meeting March 23 will clear the deck for the building phase of a row of affordable homes in Culver City. The project got its start in a decade ago when CalTrans began the project to add HOV lanes to the San Diego Freeway through Sepulveda Pass, a project completed last year.
“We’re really excited,” said Chris Untiet, faith based organizer for Habitat for Humanity of Greater Los Angeles, the group that will celebrate its 10th anniversary by building 10 affordable homes on the land. “We have groups that help build homes, but not on the Westside. This will be a big project for this part of Los Angeles.”
Homes on Globe Avenue demolished for the 405 Freeway expansion 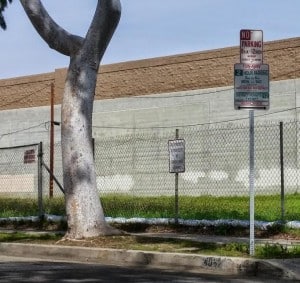 have never been replaced. Remnant land is designated for use for affordable housing. First, Cal Trans sold the land to the City of Culver City for a steeply-discounted $3.1 million, Untiet said. The building project was then delayed when state funds for redevelopment were taken back. In the decade since, the city has proposed various projects, consulted extensively with homeowners on the block and forged a partnership with Habitat for Humanity Los Angeles, said Tevis Barnes, Housing Administrator for Culver City.
“At one point three years ago, the state wanted the land back,” she said. “In December, City Council approved the development.”
Habitat for Humanity, celebrating its 40th anniversary this year, has been recruiting sponsors for the ten homes. Each will have a sponsor, which must raise $150,000 to buy the materials and provide workers to build the structure.
First the Planning Commission is to review and choose the design and density for the project. Both of these have been shown to neighbors on Globe Avenue, Barnes said.
“There has been extensive outreach,” she said. “Once the paperwork is completed, we will give the land to Habitat. It will be the second Habitat project in West LA and the first free standing affordable homes for Culver City.”
Culver City has 830 affordable rental homes, she said, including two projects built within the last 5 years that turned neglected land into 44 living spaces for lower income families.
The Globe Avenue design incorporates both stand alone and duplex structures within the complex, she said.
Once Habitat for Humanity receives the property, Untiet said, ten groups will be assigned to a home. Several have already been raising funds, including one that has finished and is ready to begin the building phase.
Construction will begin by the end of the year, or even sooner, he said, and the legacy of the 405 expansion should finally be complete by 2017.