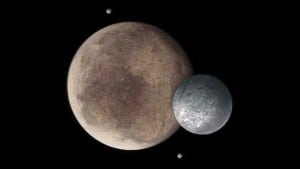 Pluto’s largest moon may have gotten too big for its own skin.

Images from NASA’s New Horizons mission suggest that Pluto’s moon Charon once had a subsurface ocean that has long since frozen and expanded, pushing out on the moon’s surface and causing it to stretch and fracture on a massive scale.

The side of Charon viewed by the passing New Horizons spacecraft in July 2015 is characterized by a system of “pull apart” tectonic faults, which are expressed as ridges, scarps and valleys—the latter sometimes reaching more than 4 miles deep.

Charon’s outer layer is primarily water ice. When the moon was young this layer was warmed by the decay of radioactive elements, as well as Charon’s own internal heat of formation. Scientists say Charon could have been warm enough to cause the water ice to melt deep down, creating a subsurface ocean. But as Charon cooled over time, this ocean would have frozen and expanded (as happens when water freezes), pushing the surface outward and producing the massive chasms we see today.

This image focuses on a section of the feature informally named Serenity Chasma, part of a vast equatorial belt of chasms on Charon. In fact, this system of chasms is one of the longest seen anywhere in the solar system, running at least 1,100 miles long and reaching 4.5 miles deep. By comparison, the Grand Canyon is 277 miles long and just over a mile deep.

This image was taken at a range of approximately 48,900 miles from Charon, about an hour and 40 minutes before New Horizons’ closest approach to Charon on July 14, 2015.

DISCOVER THE ASTROPOET IN YOU. Have you ever looked up at the Moon or stars and said, “That’s so beautiful, I wish I could write a poem about it”? Well, now may be the time for you—or your children—to do just that, and you could win an international award in the process.

The global organization devoted to astronomy education, Astronomers Without Borders (www.astronomerswithoutborders.org), invites children and adults everywhere to submit poems to its annual AstroPoetry Contest. The contest, in three categories—children, young adults, and adults—is open for poetry submissions from now through April 30. Poems may be in any form, but should be related to astronomy, space, or the night sky. For details and the submission form, go to:

As an example, here’s a poem from one of the Young Adult winners in AWB’s 2014 contest:

Classroom teachers are especially encouraged to use this contest as a student project, which would promote an imaginative mix of both English writing skills and scientific thinking. Good luck!