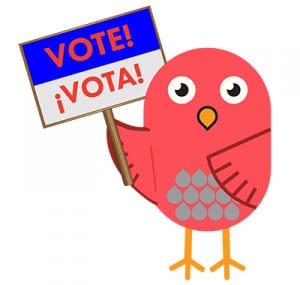 Birdee’s newest video has been unofficially released with news about registering to vote. This newest video will be officially unveiled at the City Council meeting on March 14, 2016.

Birdee is a non-partisan “tweeter” whose goal is to get the word out about registering to vote, becoming a poll worker, and how to sign up to become a permanent Vote By Mail (VBM) voter, as well as to increase voter knowledge about Culver City’s Election Day: Tuesday, April 12, 2016, when Culver City voters will elect three City Council Members.