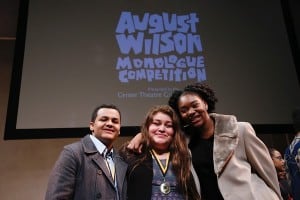 From a field of 12 local high school students, Damaris Vizvett, Samuel Christian and Aryana Williams have been selected as the top three performers in the August Wilson Monologue Competition (AWMC) regional finals hosted at Center Theatre Group’s Mark Taper Forum on Monday night, February 29, 2016. Vizvett and Christian will go on to represent Los Angeles in the national finals on May 2. This year’s competition featured high school students from three Southern California counties.
CTG is pleased to announce that Damaris Vizvett of San Bernardino has placed first in the competition, earning a $500 scholarship; Samuel Christian of Los Angeles took second place with a $400 scholarship; and Aryana Williams of Carson took third place and a $300 scholarship. Both Vizvett and Christian also earned a paid trip to New York City to compete in the national finals at the August Wilson Theatre on May 2.
Each student who participated in the competition performed a monologue from playwright August Wilson’s 10-play “American Century Cycle,” an epic dramatization of the African American experience in the 20th century.