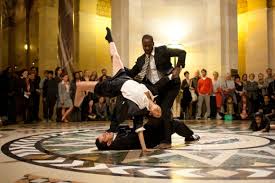 Heidi Duckler Dance Theatre will travel to Havana on April 6th to participate in the 21st annual Old Havana: City in Movement festival (Habana Vieja: Ciudad en Movimiento). The festival celebrates architecture, history, movement and creativity while encouraging the exchange of artistic ideas. It culminates with performances in the streets of Old Havana.

As a company that has produced innovative dance experiences in non-traditional places for three decades, Heidi Duckler Dance Theatre is uniquely prepared for the challenge of creating a new work in 48 hours. The choreographer and her company will immerse themselves in the rich culture of Havana as they create the new piece, Siá Kará—titled after an Afro-Cuban phrase meaning “to wash away the past.”

“We’re honored and humbled to be one of the first American companies to premiere a site-specific dance piece in Cuba,” Duckler said. “After 50 years of little to no diplomatic relations between our two countries, it’s exciting to be among the first American artists to enter Cuba in this new era. We’re so eager to begin this artistic, cultural exchange!”

Joining Duckler in Cuba will be dancers Teresa Barcelo, Roberto Lambaren, and Nick Heitzeberg, as well as videographer Sean Deckert.

The trip is funded in part by the Mid-Atlantic Arts Foundation. Heidi Duckler Dance Theatre will launch a Kickstarter campaign on March 1st to cover the remainder of the trip.