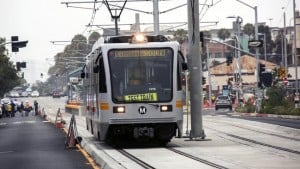 After a five-decade hiatus, passenger rail service will return to Los Angeles’ traffic-choked Westside in May. The 6.6-mile, $1.5-billion extension of the Expo Line to Santa Monica will begin carrying passengers on May 20, Metropolitan Transportation Authority officials said Thursday.

The Expo Line currently stops in Culver City. The extension to Santa Monica will mark the first passenger rail service between downtown Los Angeles and the Westside since the demise of the Pacific Electric streetcar network in the 1950s.

The light-rail line, primarily built on an abandoned Southern Pacific right-of-way, curves through Palms, Sawtelle and West Los Angeles, a route roughly parallel to the 10 Freeway. Its terminus, at Fourth Street and Colorado Avenue in Santa Monica, is a block from the Third Street Promenade and a half-mile from the ocean.

The 15-mile ride from Santa Monica to downtown Los Angeles will take about 46 minutes, which Metro officials say is a competitive alternative to morning and evening rush hours on the 10 Freeway. Trains will run every 12 minutes for most of the day.

Metro officials say the full Expo Line will handle about 64,000 boardings on an average weekday by 2030. Currently, the first half of the line — from Culver City to downtown Los Angeles — sees about 30,000 boardings per day.

The May 20 ribbon-cutting will be Metro’s second in three months. The first is an 11.5-mile extension of the Gold Line, which runs east from Pasadena through Arcadia, Monrovia, Duarte and Irwindale, ending near Azusa Pacific University.

Both projects were largely funded through Measure R, the half-cent sales tax hike that the Los Angeles County electorate approved in 2008.

Once the Gold Line and Expo Line extensions begin service, Metro will operate more than 100 miles of light-rail and subway lines.