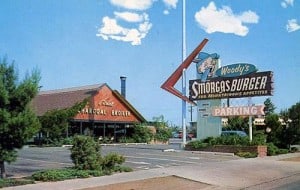 I was jarred awake from a dream the other morning. It was a big dance event of some kind. Given that I spend 15 to 20 hours a week dancing, and have attended three large dance events so far this year, it would not be unusual for me to have a dream or two based on dancing. This time, I was behind a glass window of some kind, and I saw my friend Susan dancing inside. She beckoned me to come in, but I didn’t move right away; I think I was finishing a conversation or something. Then I left, to figure out how to meet up with her, and everyone was gone. That scary feeling of abandonment woke me up with a rapid heartbeat.

Throughout my childhood, from as early as I can remember, we ate every Monday night at Woody’s Smorgasburger, which was on the exact spot that El Pollo Loco is now, on Berryman and Sepulveda. I researched to find that the Culver City Woody’s went away in 1985, when I was living in Japan. Both parents were still alive, but maybe they weren’t eating there as much anymore, because I don’t recall hearing the news of our good old Smorgasburger’s demise. Then again, that was the year my mom was diagnosed with lymphoma, so our family had bigger fish to fry than the closing of a restaurant.

My father liked hamburgers – his favorite food – and he liked routines. In his later years, he printed up his usual order at La Salsa onto a little business card, so he could just hand it to the servers when he walked in. For one, his order never varied, and secondly, the card obviated the need for extraneous small talk. He hated small talk; he loved, on the other hand, a debate. And oh how I’ve turned into my father on that score, too.

Dad had determined early in my life that Woody’s Smorgasburger (we referred to it as “Smorgasburger, not Woody’s) had the best burgers. There are threads on the web that talk about the burgers, and a quick perusal of them reminded me that the menu had an alpine theme (people mention a burger called “The Matterhorn.)” Our family would trek down to Culver City every – and I mean every – Monday night for dinner. If relatives or friends were visiting from afar, they would come along, too. When my sister was born in 1965, I remember being in charge of going ahead to find a table and watching her there while dad and mom got the burgers for us. Later, they had a soft ice cream dispenser, and tons of toppings; we would challenge ourselves to make the serving as large as possible, to get our money’s worth. These days at Menchie’s and the like, they weigh portions to defend their profits against people like us.

Anyway, you’d order your burger in a line that passed the grill where the burgers were being made, then you’d pay at the end, after which you’d turn a corner to put on the condiments. Beyond that area, there were the bathrooms to the left, which you passed on the way out the back door and on out to the parking lot. We didn’t just take the food home from there; we would hold our trays while looking for a seat at the large dark wood picnic tables and benches, like you’d have at a park. My dream/nightmare would be that I’d lose my parents just at the moment that we turned that corner toward the condiments. I would awake with a start, and, over time, I began to think up reasons for where my parents might have actually gone in the dream, so I could go to sleep already knowing the answer.

Extrapolating Susan’s comment about this morning’s dream, it would explain so much about fears and insecurities I’ve dealt with my whole life, a fact most friends are surprised to hear about. Most know me as a paragon of self-confidence. I dance in the middle circle when I know the steps well, and rather than pay attention to the so-called “walk-through” they provide at Contra Dancing, I like to challenge myself to pick up the steps as they are being called out. I have the confidence to drive long distances alone, to eat out alone, and to write a weekly column, for heaven’s sake. At work, I’ll sometimes say things like, “I know better,” and have to be reigned in in order to allow others to have a say. Confidence, however, allows a person to be a decisive, can-do individual.

So I must have overcompensated to overcome my original shyness and insecurity. By turning myself into a bolder person, I became the chutzpah behemoth I am known as today. Growing up, however, I was shy in the classroom, scared to play sports, scared of animals, and hated making speeches, performing and would not have been considered popular. Shyness, I believe, is merely a manifestation of insecurity, and there are still moments when I realize that I am really a shy introvert at heart. Dreams sometimes serve as reminders about our inner selves.

Who would have guessed that the site of that recurring childhood dream would be in the immediate vicinity of where I live now. In the day, we’d shop at Target’s ancestor, Unimart, where our neighborhood Pavillion’s is now. The Venice Blvd. “31 Flavors,” now referred to as Baskin-Robbins, where we sometimes got a cone on the way back to Mar Vista, is still there. Growing up, Culver City was only two things to me: Smorgasburger, and where my parents played Bridge, but now it means so much more.