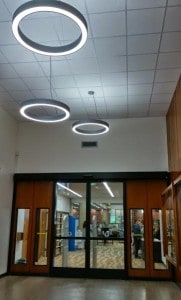 Culver City’s 101-year-old Julian Dixon Library took its centennial year off to renew itself and emerged February 20th with a whole new look inside and out, from the lobby’s cool circular chandeliers to the giant canopy in the parking lot.

“Not one parking space was lost,” said Laura Frakes, community library manager. “We are very proud of that.”

As staff and Friends of the Library greeted patrons returning on Saturday, Feb. 20,2016 after 13 months of construction, 384 photo voltaic solar panels installed on the roof and on a canopy in the parking lot supplied power to the new LED lighting system, 28 new computers, self-checkout system and all other energy needs.

Culver City has one of the busiest among the 86 libraries in the County of Los Angeles system. It is number one in holds and in the top five for circulation. Now they’ve added another number one spot: the first to install a solar power system large enough to supply all the library’s energy needs.

“It is the first library to have net zero electrical useage,” said County of Los Angeles Library Assistant Roxane Marquez. It is designed, she said, to make enough energy during the day to supply the needs at night. The system does not have batteries to store energy, so will draw from the Southern California Edison power grid as needed.

The savings from integrated LED lighting (65% inside and 50% out), 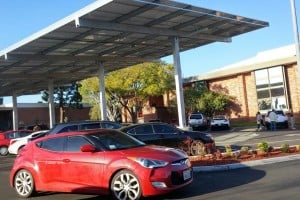 new suspended ceiling panels and windows and the solar power system will save the Los Angeles County library system $27,000 annually. The cost for the solar system was $650,000, according to Marquez.

“The lights look different,” Frakes said. “They are brighter but softer. They are controlled to dim when the sun is shining and brighten on cloudy days and after dark.”

Students from Culver City schools, who missed studying at the quiet library and using its computers, checked out their new homework help area at the opening. Parents who had to forego the regular children’s activities while the Mayme Clayton Library did substitute duty as a check-out library, sank into the stuffed chairs and new carpet of the Children and Family area to read to their excited kids.

Libraries serve a whole new group of people in the 21st century, including searching for jobs, needing computer help or just computers to use, early childhood literacy programs and social media outlets. All were happy to be back in the huge open space, with a soaring, acoustic-friendly suspended ceiling and ambient temperature controls.

Of the $2.5 million cost, the Friends of the Library donated $215,000 for new furniture, including new chairs for every use and space.

The photo voltaic panels will produce more than 192,000 kilowatt hours per year, equivalent to its new energy- efficient design. This will reduce greenhouse gas emissions by 137 metric tons of carbon dioxide, equal to taking 28 cars off the roads. The savings equal the carbon sequestered in 112 acres of trees.

“It’s one of the largest solar power systems in the LA County Library system,” Frakes said.