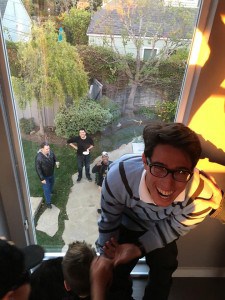 Rituals — I’ve been going dancing every Wednesday for the past twelve years. I usually meet a friend for dinner before the dance. This past year the dance was on hiatus, and we were out of pattern for too long. Finally, our dance returned, but it’s leader and venue changed altogether, but back to our pre-dance dinner were we. What we do is: meet at 7pm, go to the same restaurant, order the same thing (week to week, and as each other), then go to the same Starbucks for the same drinks, and show up for the dance by 8:30pm. Even a change advocate like me can be content with the constant, delighted in declining decision, and ready for repetition’s reliability.

Our little Yuko Kitchen is on Dunsmuir, tucked away off Wilshire Blvd. It’s not the traditional Japanese restaurant you’d find all over L.A., rather, it is a real Tokyo-style cafe. A team of young Japanese staff serve up a limited menu featuring mostly udon and rice bowls (donburi). They also bake. They have a sesame cupcake that I dream of all week, and a chocolate chip cookie with chips baked both in and outside the cookie.

The sesame cupcakes are eaten before dinner. I have mine with a spoon, savoring the soft, fluffy confections in six bites. Then I chew off the film of cake that’s left on the cupcake wrapper, sucking it clean. The chicken teriyaki bowl consists of a little rice, some salad with sesame dressing, and a palmful of chicken that’s lightly breaded and doused in a orange-colored savory teriyaki sauce. The tables are small, nestled in a space that has a high ceiling, and walls painted colorfully with original art. There is a makeshift outside area warmed with heat lamps. The casual atmosphere yields the speaking of world languages, business jargon and girl talk.

After dinner, we go to the Starbucks on Fairfax and Olympic. My friend likes a chai latte with less water, and I like a decaf misto (Starbucks for cafe o’ lait). Starbucks doesn’t brew decaf after noon, which I find odd; when else would a person want decaf? Some of the stores will just tell you “no,” but this store has a special machine which makes whatever they do not have pre-brewed. It is basically a large-format French press. They spoon in some decaf beans, pulverize them in a grinder, pour them into the machine, then add boiling water. They take a whisk and stir the coffee and hot water, then put a cup under the spout, and turn on the machine. As the machine pushes up the grounds into a chocolate cake-like layer, the coffee liquid is pushed out of the spout. The grounds descend, then ascend, and the attendant grabs a spatula-like instrument to clear away the grounds like a pinsetter in a bowling alley. I love to watch it as they lovingly custom make my drink for me, not to mention adding steamed 2% milk, as per my request, into just a quarter of the cup.

I’m reminded of ritual again today, as we celebrate Super Bowl Sunday, an entirely American observance of an entirely American sport. So many of our other national sports, from baseball to basketball, are increasingly enjoyed and played abroad, and we, in turn, are learning to love “futbol” (soccer). But football is ours.

Personally, I don’t know a thing about the game. I like the pageantry, and the gear the players and fans wear. I like the terminology and metaphors, like “the whole nine yards.” I like how the spectating of this sport in particular creates community; after the game I heard two strangers in line at the market discussing some fine points of today’s game and it’s players. I love the way people will scream at the top of their lungs when watching football. I like the gambling games people make up, based on real mathematical concepts. Football is not only big business, but it is also a motivator for students to aspire to college.

This 50th Super Bowl seemed a lengthy track record to young people, but the event is younger than I am! This outgrowth of British rugby grew in rapid popularity after World War II. It’s Americanishness is demonstrated also in the predominant percentage of African-American players. Like jazz, blues, hip hop and rap, this is an original recipe made from some of the oldest ingredients in our melting pot.

So we look forward to Super Bowl Sunday; my younger son – away at college for the first time – lamented missing the party. Our family has gathered at the same friend’s house for the past fifteen or more years. It has often been pool-warm as it was today: ho hum another sunny California day in February. We eat our snacks, drink our drinks, converse, and relax while some people actually do watch the game. Everyone bonds over the commercials and the half time show, which feature the world’s greatest talents.

Super Bowl Sunday is a holiday of Americana, lining up in its ritualistic nature with Thanksgiving and 4th of July. Today reminded me of the backhanded depiction of Americana on the Amazon series, “Man in the High Castle,” when they show “VA (Victory Over America) Day.” People are barbecuing, out in the streets, friendly…except that they go around, all smiles and cheer, saying “Heil Hitler” and “Sieg Heil.” If the Nazi’s had won, how would it have affected our rituals? My Japanese first husband once said that he’d decided to have his crooked teeth fixed because, “here in America, no solemn bows, they expect you to open your mouth and smile.”