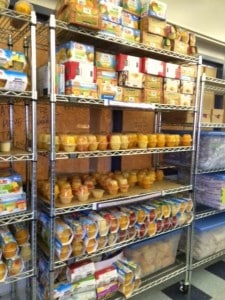 Culver City scored a touchdown with last weekend’s Backpacks for Kids Program food drive at the Pavilions on Jefferson. The two-day event brought in over $6,600 dollars’ worth of food and donations moving the ball well down the field within sight of the goal. The Backpacks program provides food for the weekend for students throughout the Culver City school system. Currently feeding 100 families, the program started with 50 in December of 2013 and has grown rapidly ever since.
The dynamic trio of Leslie Gardner, Megan Rawls, and Jamie Wallace gathered together a wonderful crew of volunteers including parents, students, a candidate for city council, roped in spouses, and even graduates who handed out fliers and cheerfully talked to shoppers from morning into evening. The shoppers responded with an exuberance of kindness donating food and money for the program.
The drive is perhaps best summed up by Goran Eriksson who volunteered on Sunday before the big game. Goran, a candidate for city council remarked, “I have participated in the annual homeless count for the past years and have seen, firsthand the increase in homelessness in our area. Many people in Culver City have no idea that students in CCUSD schools are homeless or are faced with financial situations at home that mean they may not get enough food, especially during the weekends. The Backpacks for Kids program has had an incredibly positive impact on those families who need a little help, and I am proud to be a supporter.”

Special thanks go to Store Manager Robert Sakaguchi and Assistant Manager Stanley Hodge, III, who created an enticing display and helped in every way possible throughout the weekend.
The Backpacks Program is completely reliant on donations, it receives no funding from the School District, or the state. At this time, they fill 100 backpacks a week with around $10 dollars’ worth of food in each. Over the 36-week school term that equates to a budget of around $36,000 a year. During their last food drive in July, the Backpacks team had a chance encounter with a representative from the Mark Hughes Charitable Foundation. Superintendent David LaRose continued the conversation with the Hughes Foundation which brought an invitation to write a grant for funding. At the end of 2015, Jamie Wallace, aided by David LaRose and Leslie Gardner, sent in a grant request. In early 2016, the Mark Hughes Foundation gave Backpacks a $25,000-dollar check.
The Mark Hughes grant gives Backpacks its first ever operating fund. Every year there is an anxious scramble for funding from school PTA and Booster clubs, as well as requests sent out to charitable and social organizations, individuals, and the community. With the Hughes grant as well as the generous donations from Kevin Lachoff and the Chamber of Commerce, and the Lois and Jason Frand family, Backpacks is breathing easier and knows that it can meet this school years’ commitment.
The Backpacks team would like to thank all of its volunteers, involved school staff, and supporters.
For more information or to donate go to www.ccbackpacksforkids.com; or email [email protected]