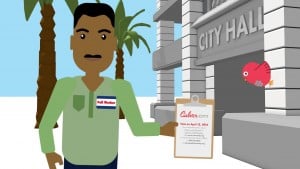 At the January 25, 2016 City Council meeting, the City Clerk’s Office introduced Culver City Counts, the Culver City Voter Education and Outreach Program and its mascot Birdee with a 30 second animated video which can be found at www.culvercity.org/vote. Birdee is a non-partisan “tweeter” whose goal is to get the word out about registering to vote, serving as a poll worker, and signing up to become a Vote-by-Mail voter, as well as increasing voter knowledge about the election process and Election Day – Tuesday April 12, 2016.

“With the support of the City Council, the City Clerk’s Office is proud to
partner with See Political, a non-profit, non-partisan organization that
informs and empowers voters through entertaining educational videos, to create Culver City Counts – a new multi-media campaign focused on
engaging voters” said City Clerk Martin Cole. “With voter turnout dropping across the nation, Culver City is looking to ‘buck the trend.’ With Birdee’s help, we look forward to improving voter knowledge and participation during this year’s election.”
Look for Birdee to show up throughout the City via social media, interior
bus signage, posters, and – who knows where else! Follow, like, and share Birdee on:

Culver City’s 2016 General Municipal Election takes place on Tuesday, April 12, 2016 when Culver City voters will elect three persons to serve on the City Council. Polls open at 7:00 AM and close at 8:00 PM. For more information about the election process, including how to register and when/where to vote, please contact the City Clerk’s Office at 310.253.5851, via email at [email protected], or visit www.culvercity.org/vote.