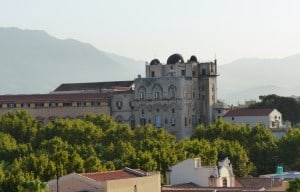 New Year’s Day, 1801, the dawn of the 19th century, was a historic moment for astronomy, and for a space mission called Dawn more than 200 years later. That night, Giuseppe Piazzi pointed his telescope at the sky and observed a distant object that we now know as dwarf planet Ceres.

Today, NASA’s Dawn mission allows us to see Ceres in exquisite detail. From the images Dawn has taken over the past year, we know Ceres is a heavily cratered body with diverse features on its surface that include a tall, cone-shaped mountain and more than 130 reflective patches of material that is likely salt. But on that fateful evening in 1801, Piazzi wasn’t sure what he was seeing when he noticed a small, faint light through his telescope.

“When Piazzi discovered Ceres, exploring it was beyond imagination. More than two centuries later, NASA dispatched a machine on a cosmic journey of more than 3 billion miles to reach the distant, mysterious world he glimpsed,” said Marc Rayman, mission director and chief engineer for Dawn at NASA’s Jet Propulsion Laboratory, Pasadena, California.

Piazzi was the director of the Palermo Observatory in Sicily, Italy, which has collected documents and instruments from the astronomer’s time, and published a booklet on the discovery of Ceres. According to the observatory, Piazzi had been working on a catalog of star positions on January 1, 1801, when he noticed something whose “light was a little faint and colored as Jupiter.” He looked for it again on subsequent nights and saw that its position changed slightly.

What was this object? Piazzi wrote to fellow astronomers Johann Elert Bode and Barnaba Oriani to tell them he had discovered a comet.

“I have presented this star as a comet, but owing to its lack of nebulosity, and to its motion being so slow and rather uniform, I feel in the heart that it could be something better than a comet, perhaps. However, I should be very careful in passing this conjecture to the public,” Piazzi wrote to Oriani.

By July 1801, Piazzi had calculating the object’s orbit and made public

his observations, announcing it as a planet, and naming it “Ceres”—after the Roman goddess of agriculture, was also the patron deity of Sicily, where Piazzi then lived and worked.

The news was especially interesting to Bode because he had championed the Titius-Bode hypothesis: that the positions of planets in our solar system follow a specific pattern, which predicts each planet’s distance from the Sun. The pattern demanded that there be a planet, yet undiscovered, between Mars and Jupiter—and this is exactly where Ceres orbited.

In March 1802, Heinrich Wilhelm Matthias Olbers discovered a second, similar object: Pallas. William Herschel, discoverer of Uranus, then wrote an essay proposing that both Ceres and Pallas represented an entirely new class of objects, which he named “asteroids.”

The door had opened for many more asteroids to be observed. The discoveries of Juno in 1804 and Vesta in 1807 reinforced Herschel’s notion that asteroids are a class of their own. Today, we know there are hundreds of thousands of asteroids in the main asteroid belt between Mars and Jupiter.

Now, as we commemorate the 215th anniversary of Ceres’ discovery this month, Dawn is observing the dwarf planet from its lowest orbit ever: 240 miles from the surface. The many craters and other features that Piazzi could not see with his telescope are being named after agricultural deities or festivals, extending the theme that Piazzi began with the name “Ceres.”