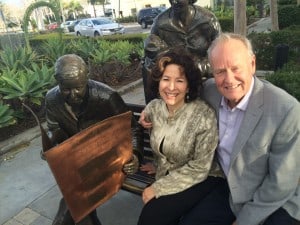 It was a busy weekend for the candidates in the council race, culminating in Scott Wyant’s fundraiser at the Culver Hotel on Jan. 31. Shown here with his wife Leslie Spanier-Wyant and the ubiquitous Harry Culver, the downtown event sparked some fun with live music and raffle prizes, and speeches from supporters exhorting the crowd to get out the vote.

Among those attending were current council members Jim Clarke and Jeff Cooper. Both spoke to their support of Wyant’s council run.

Clarke noted that “Thanks to the way our calendar is set, we are in mid-budget process when we get these new council members seated, and we need someone who can walk in the door fully prepared and hit the ground running. Scott has served more than seven years on the Planning Commission, and he can do that. He can take office and get right to work, without a big learning curve, he knows how [city government] works.”

The promise of a mystery musical guest brought out none other than …Scott Wyant (surprise!)  to play the bass along with his already busy musicians Jim Solomon and Valda Hammick who were making great sounds all evening. Click here for a short clip IMG_1268

Council member Cooper also sang Wyant’s praises, metaphorically rather than musically. He noted “We need a good team player, and Scott has shown himself to be one on many occasions. His time as a commissioner shows how he listens to people, and how good he is a responding to challenges.”

For more on the Wyant campaign, go to www.wyant4council.com/