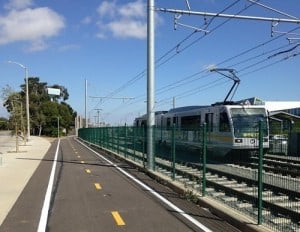 The opening of the Expo Line light rail’s second phase, which will run between Culver City and Santa Monica, is prepping to open this spring, so there are still some final tweaks being done as the construction authority finishes up testing on the line and hands it over to Metro to operate. After first deciding not to put up fencing along the route, Santa Monica City Council officials changed their minds last week, in large part because of stats in a staff report from this fall that show a disquieting amount of people on foot, on bikes, and on skateboards crossing onto the tracks, says the Santa Monica Lookout. “During this testing phase, these staff and law enforcement agencies have recorded a large number of pedestrians, bicyclists, and motorists consistently trespassing in the Light Rail guideway, raising serious safety concerns,” the report says.