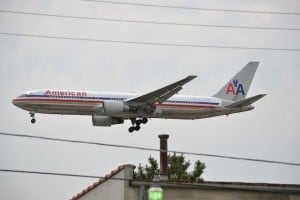 There’s a mystery unfolding in the skies above Culver City.

Airplanes bound for Los Angeles International Airport appear to be flying overhead more frequently and at lower altitudes. For two or three years now, the aircraft have been so low that residents say they can clearly make out tail numbers on the jets. Every few minutes the engines of those low-flying planes roar overhead, interrupting lives on the ground.

“Nobody wants to have the loud noise or those jumbo airplanes fly over you,” said Kathy Tsao, a 30-year Culver City resident who joined about 150 protesters marching outside Culver City Hall on Saturday morning.

Her friend Rose Lan can’t remember it being like this in the 25 years since she moved to the city. “Very low, noisy and the air pollution — that’s the part we don’t like,” she said.

Protesters and city officials said they have complained to the Federal Aviation Administration about the noise, but that the agency has not offered an explanation.

“Our ears and our eyes and our neighbors don’t lie,” said Culver City Councilwoman Meghan Sahli-Wells. She said she can hear the planes inside her home even with all the windows shut.

To confirm what their constituents were experiencing, city officials filed public records requests for data from the FAA and Los Angeles World Airports, the city agency that operates LAX. With that information, Williams Aviation Associates said it found that more planes were flying closer to homes and businesses.

“Compared to the Federal Aviation Administration, we’re pretty small,” Sahli-Wells said. “But we don’t like to be pushed around.”

In response to the Culver City complaints, a spokesman for the FAA in Washington released a general statement Saturday detailing the agency’s outreach efforts about a major change it is about to make in the way it manages flying aircraft.

In 14 regions around the country, including Southern California, the agency is moving to an air traffic control system based on satellite data rather than old-fashioned radar technology. The move could reduce flying time and ultimately allow airports to handle more traffic.

The new system will “reduce fuel consumption, aircraft emissions and noise over many neighborhoods,” the FAA statement said. A draft environmental report about the new system found that neighborhoods in Los Angeles would not experience a significant increase in noise.

“The FAA has complied with federal environment laws and policies during the development and implementation of these procedures and recently has expanded its community outreach efforts early in the process,” according to the statement, which did not address why Culver City residents believe they are already seeing changes in the skies. “The FAA is committed to providing opportunities for the public to comment and to considering those comments.”

In Phoenix, city officials have sued the FAA, alleging that initial changes led to more noise in the communities surrounding the airport. And in Northern California, residents have asked a federal appeals court to review the project’s environmental analysis.

A courtroom could be where the Culver City protesters end up. Organizer June Lehrman with the LAX Community Noise Roundtable expects there to be more protests and, possibly, litigation if the FAA makes a final determination that the community won’t be impacted by new flight paths.