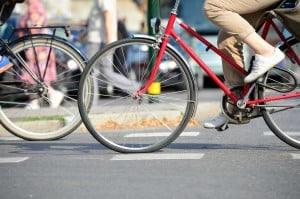 On October 22, 2015 the City of Culver City was awarded a $2.6 million grant for the Washington-Culver Pedestrian and Bicycle Safety Project from the California Transportation Commission. The funds were awarded through an Active Transportation Program (ATP) Grant. The ATP was created in 2013 to encourage the increased use of active modes of transportation such as biking and walking.

This project is focused on safety improvements along Washington Boulevard, Matteson
Avenue, Girard Avenue, Tilden Avenue, and Elenda Street near La Ballona Elementary
School and will include signals, corner curb extensions, and high visibility crosswalks.
The new pedestrian-activated signal at Washington Boulevard and Huron Avenue will
enhance safe pedestrian access to La Ballona Elementary School and to the King
Fahad Mosque. A new high visibility crosswalk will be added at Washington Place and Tellefson Park. Additionally, the project includes a protected cycle track (separated bike lanes) on Elenda Street from Culver Boulevard to Washington Boulevard. Along with the construction of the separated bike lanes, new canopy street trees will be planted, and lighting will be installed on Elenda Street.

“These improvements will be yet another important step forward for Culver City in its continuing efforts to create safer pedestrian access in this area and throughout the City. We appreciate the positive action of the California Transportation Commission in allocating these funds, and Culver City looks forward to implementing this project with the support of the King Fahad Mosque and the Culver City Unified School District”, said Culver City Mayor Micheál O’Leary. “We are grateful for the strong partnership we have with Culver City officials and for our shared commitment to the safety of our children and families. This grant is a reflection of our collaborative relationship and will strengthen our efforts to promote safe and healthy routes to school”, added David LaRose, Superintendent of Culver City Unified School District. Construction on this project is anticipated to begin in summer 2017.