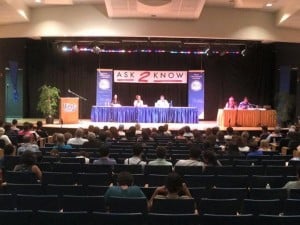 West Los Angeles College was the scene last Wednesday Oct. 14, 2015 for the Ask2Know School Board Forum, and event that has allowed students to ask questions of the school board candidates for the last two election cycles. Giving the kids direct access to the school board candidates – Anne Burke, Kelly Kent and Scott McVarish – let some end-user perspective reach up to the people hoping to be in charge.

KidScoopMedia Founder Michelle Mayans began by offering her thanks to West LA Interim President Robert Sprague for the venue, and kudos to CCHS teacher Genevive Gilbert Rolfe for “making the connection with her students that makes this event matter.”

The questions that most surprised the candidates wee those regarding the facilities. While the voter-oriented forums have been filled with talk of the school bond, Measure CC, that passed in the last election, the kids were talking about broken hydration stations and unusable bathrooms.

The heat was really on – the heat. The topic of air conditioning for classrooms, why physical education classes were still taking place outside in the 90 degree weather, and what could be done to shift the calendar back so that classes didn’t start in the middle of August.  All of the candidates listened respectfully to the children, and answered with gravity and clarity.

Stepping away from the questions about the physical schools themselves and towards what happens inside, a question was put forth about the Loyola Marymount curriculum currently in place for teaching Common Core Math. A tactic that the audience seemed to have discussed beforehand was for all the students affected by the question to stand in unison with the speaker at the microphone. When the question was asked about Common Core Math and the LMU method, almost the entire audience stood, and got a quick lesson in organizing from Scott McVarish.

McVarish said “If I am elected, it’s going to take a bit of time – but I can promise you that by January of 2016, I can call for a meeting on this, and you all need to show up. If enough students get organized and speak out together, change will happen.”

The students asked some of their fun questions such as “If you were able to meet someone from history, who would it be? McVarish chose Abe Lincoln, Kent wanted Mark Twain and Burke selected Rosa Parks. But the tone of the debate was not about fun, it was substantive changes that CCUSD students want to see come into their schools.

After balloting, the crowd chose Burke and McVarish to fill the upcoming seats.