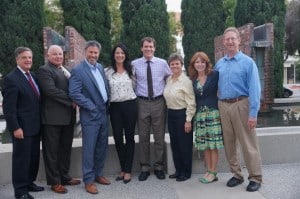 Candidates Anne Burke and Scott McVarish announced today that they have received the support of six of the Culver City elected officials who have taken a stand in this election.

“We are proud to be endorsed by so many community leaders,” said Burke. “It means so much to us to know they trust us to handle the serious business of our school district.”

“One of the most critical tasks the school board is engaged in is ensuring that Measure CC bond funds are spent wisely, fairly, and effectively,” said current board member Kathy Paspalis. “Anne and Scott have done their homework. They understood the need for a school bond and worked for it from the start. They are well-prepared to handle the complex issues involved.”

Councilmember Jeff Cooper echoed Paspalis’ confidence. “Anne and Scott have received the resounding support of so many community leaders because they are informed, intelligent, and have proven their commitment to our children and our schools.”

In addition to Paspalis and Cooper, the candidates have earned the support of School Board Members Laura Chardiet and Steve Levin, and Councilmembers Jim Clark and Andrew Weissman

McVarish states, “Anne and I are ready to build on our district’s successes and take our schools to the next level. We bring different and highly complementary skills, experiences, and perspectives to the table, and we hope that Culver City voters will give us the opportunity to serve.”

Anne Burke and Scott McVarish are running for the two open seats on the Culver City School Board in the election to be held on Tuesday, November 3rd, 2015.