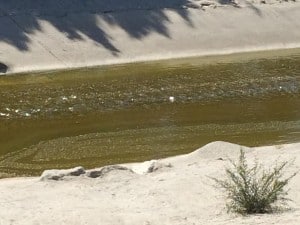 An Ode to Ballona Creek —

The Los Angeles basin is basically a desert that leads out to the Pacific Ocean. The city, however, as many worldwide, actually grew around a river. The Los Angeles River had overflow problems, and the Army Corps of Engineers cemented it in years ago, before the technology to allow the river to flow safely, and water to be conserved, existed. Now, projects are underway to “revitalize” the Los Angeles River. Related, but not exactly a tributary, is our own Ballona Creek; yes, one of the most beautiful aspects of Culver City is that we have a “river” running through us.

I ride my bicycle on our creek every day, during my ten minute commute to and from work. Before I was riding, regular after-work power walks along the creek with best buddies from work was a favorite, healthy, pastime. When I considered downsizing earlier this year, I looked at various condos, but my number one consideration was: how far from the creek? I stayed in my house, and my love for the waterway has only intensified since. There are many pleasures to recount about it, from its physical beauty, to the characters you meet, to the vistas our eyes are treated to along the way.

Often, the creek is green; algae form at the cement bottom, and a light wind ripples across the thin layer of water. When heading east, the Hollywood sign can be seen from various vantage points, as can the close hills bordering Culver City to the south, and the further mountains encrusting Los Angeles to the north and northeast. Going west is the biggest treat; you end up in Marina del Rey or on the beach in twenty minutes. The Ballona Creek bike path is, for my out of town and country guests, a main tourist attraction, like going to Disneyland. I borrow a bike for them from my neighborly brother-in-law or sister, and off we go. In either direction, at the opposite ends: downtown Culver City or the Marina and Playa del Rey’s, there are delectable snacks and libations to be enjoyed, earned by the exercise of the ride.

In the mornings, I meet current and former students on their way to the multiple school sites we have along the route. I meet parents and colleagues, with whom I can occasionally exchange a salutation. There’s a guy on his morning constitutional whom I’ve seen almost every weekday for low these two years. We graduated from: no acknowledgement, to a nod, to a wave, to a hearty, “good morning, and a wave.” I know how early or late I am when I get on the path by the moment at which I pass this particular gentleman.

My commute home sometimes yields the greatest payoff: a Los Angeles sunset spread out right before my eyes. A few times I’ve been so spry as to keep riding to the west, but my jaunts out to the end of the continent are usually reserved for more leisurely weekend time. When riding west from Sepulveda (a.k.a. Pacific Coast Highway), I knew I was passing Sawtelle, Inglewood, Centinela, the 90 (Marina) freeway, and Lincoln, but it took an out-of-town guest to point out to me that you pass under the 405 as well! I nearly bet against the 405, but was summarily shown the familiar signs that exist above the path. Each passage under a freeway or a thoroughfare is a dip down closer to the water, which starts out thin at its inland end, but gradually becomes deep and ocean-like during high tide, as it gets closer to the Pacific.

When it rains, the path must be closed, because the creek rages up past the lowest parts. On the days after such a torrent, until the volunteer and/or city maintenance people arrive, snits of trash and plant fronds can be seen wrapped around the railings. Fortunately, but also unfortunately, I have only been rained out of my commute a couple of times over the past three years.

The flora and fauna is diverse. At times, there is nothing to see but sand-like concrete and sparse weeds, and the urban scrawl of graffiti here and there, usually mopped up pretty quickly, except for inside the winding, dark tunnels that exist under our fair town. There are tons of bird varieties, as diverse as the people on foot and bicycle. Near Marina del Rey Middle School, the creek front has developed into a bayou-like stretch of green, and they’ve built a new viewing point across from the school.

I’m glad to see some clean up activity here and there; today, the broken up asphalt of the path between Culver City Middle School and Sawtelle had been slurried. Seemingly under the jurisdiction of the City of Los Angeles, one knows not who to contact about the fact that the bike path cannot be accessed from the appropriate side of Sawtelle when entering to go east; the gate to the bike path is locked. I was told that only the owners of properties in that specific neighborhood (near the McDonald’s) hold the key.

Finally, we have a cute bridge, the only river crossing that is not a street overpass. It is a strategic ingress and egress for our cluster of schools: my current Culver Park High School and CCUSD IAcademy, my former Culver City Middle School and its neighbor Culver City High School. Nearby are also Farragut Elementary, the Office of Child Development (for our youngest) and, off in the distance, La Ballona Elementary School, not to mention Culver City Adult School. Ironically, the roughest part to ride sidles along the meticulously manicured middle and high school fields, while the smoothest and spiffiest portion is creek side to our yet-to-be-landscaped humble alternative education pantheon: Culver Park High School.

Our creek is unique. If you know not of what I speak, come and take a peek.