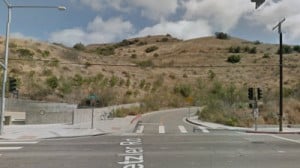 Culver City police on Tuesday were looking for an armed man who attempted to assault a woman while she was working out at a park the previous night.

Shortly before 10 p.m. Monday, the woman was exercising at Jefferson Boulevard and Hetzler Road — which is the location of the Baldwin Hills Scenic Overlook — when she was approached by a Hispanic man holding a knife, according to officials with the Culver City Police Department.

He attempted to assault the victim, but she was able to get away, according to Lt. Dunlap.

The unidentified woman was not injured in the attack.

Police have described the man as 30 years old, about 5 feet 6 inches tall with a thin build and high cheek bones. He was wearing dark shorts and poncho-style sweatshirt, Dunlap said.