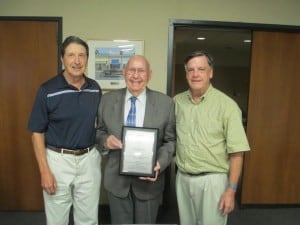 John Riordan of Riordan Plumbing received a plaque, Monday, by the Culver City Centennial Celebration Committee (CCCCC) at its monthly meeting in City Hall, to add to his dozens of community awards as the company approaches its 50th year of service to the Westside.
“John Riordan is the first business owner to contribute to the Culver City Centennial Celebration Committee, and he personifies the strong support that the people of Culver City have for their community,” said Paul Jacobs, Vice President of the CCCCC and former Culver City Mayor.
“John has been recognized by almost every organization in this city for his participation in worthy causes. We are pleased to add another honor to his “Wall of Fame,” said Jim Clarke, CCCCC President and Culver City Councilman.
The CCCCC has raised or received commitments of $50,000 from individuals, organizations and businesses to conduct the city’s year-long birthday party, according to CCCCC Fund Raiser Chairman Terry Robins.
“Participate in our Centennial as a sponsor, activity leader and in other ways by leaving a message at (424) 258-0112 or email at [email protected]. We want everyone to join in the celebration,” said Clarke.
A downtown parade of community groups, a ceremony with special guests and a street party, September 24, 2016, will open the Centennial’s 12 months of activities.

CENTENNIAL AWARDEE: John Riordan of Riordan Plumbing displays a plaque presented to him by the Culver City Centennial Celebration Committee (CCCCC) at its monthly meeting, Monday, at City Hall.  Riordan was honored as the first business owner to contribute to the city’s year-long birthday party, which begins, September 24, 2016, with a downtown parade, ceremony and street party.  Flanking Riordan are (at left) Paul Jacobs, CCCCC Vice President, and Jim Clarke, CCCCC President.